The Hawaiian lava flow & what if it hits Latrobe 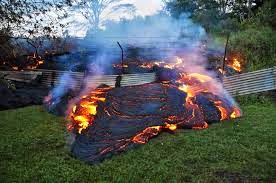 The Pahoans seem to be standing up in good order as one of the world’s most unusual natural disasters is about to befall their Hawaiian village.

They're about to be wiped out by a volcano!

One that could be outrun by a turtle with sore feet.

Have you been following this one? I’m fascinated.

The 1,500-degree lava in June emerged from a vent on the Kilauea volcano and has been moving at about 10 yards a day and headed straight for the town of about 1,000. If it goes along it’s projected path at that rate, it could cut the town in half sometime in June.

Run for your lives!

Or maybe form a Conga Line.

From news reports I’ve seen, many residents are mostly concerned about the inconvenience. The lava is likely to scissor a main road, which would add a three hours to get to and from the nearest Olive Garden.

This from Hawaiian News Now: “The lava flow crossed Appa Street, also known locally as Rubbish Dump Road, south of the Pahoa Transfer Station, which was not impacted at all.”

If I read that correctly, it sounds like if it shifts even a little bit, the only casualty would be the town dump, which would add glorious mythological wrinkles to the story of the pagan volcano gods charged with protecting paradise. And residents could instead of driving along Rubbish Dump Road could just pitch their garbage right onto Rubbish Dump Road, which could be renamed Nature’s Incinerator Road.

Of all the people I’ve seen interviewed by drama-craving reporters, my favorite was a guy who said, well, there’s nothing they can do so he was going to go grab a beer and burger and talk with his buddies about the football scores.

He’s right. This isn’t exactly the Brits during The Blitz.

I tried to think how my town would react if faced with a similar threat. Would there be panic? Would neighbor turn against neighbor?

Then I realized my hypothetical was ridiculous.

Arnold Palmer would never let anything bad happen to Latrobe.

Did you see Latrobe is now brewing the new Blonde Guinness?

I can only suspect the famed Irish brewery thought they only way they could improve their product is if they began making beer with the same water Palmer uses to shower.

But let’s say Palmer was busy, that he was in Orlando once again cuddling with supermodel Kate Upton and understandably couldn’t be disturbed.

How would we react if a slow-moving lava flow threatened to cut us off from, say, Derry Borough?

First of all, it would be a greater tragedy for Derry than it’d be for me. Derry has nothing I couldn’t do without. It would have been different 20 years ago when I used to frequent the Lakeside Inn, Derry’s charming Ma 'n' Pa strip club.

But let’s say Derry was Pittsburgh, a place I enjoy visiting on a weekly basis.

What would I do if a 20-yard wide 1,500-degree river of lava got between me and Primanti Bros.?

First of all, I’d take my ’07 Saturn to my mechanic and ask him to add a turbo charger and some industrial strength shock absorbers. Then I’d petition the town to build a ramp.

Then it’d be time for Leap the Lava!

It’d be an even bigger Latrobe tourism draw than the historical marker indicating the now-vacant lot where the very first banana split was constructed.

I was interested to read that one power company entombed the base of its utility poles with a cinder and cement mix that resists lava.

That’s incredible, although I doubt the man assigned to tend the pole next time a bird’s nest needs removed feels as cheerful about the advance.

I told a friend about it and he suggested they use the miracle material to construct a dam to save Pahoa.

His heart’s in the right place, but his logic is marred.

Because the earth is unlikely to ever run low on lava and even a grand structure the size of Hoover Dam would eventually fail and the result would be like the historically catastrophic Johnstown Flood, only with molten lava.

So I applaud the Hawaiians for the relaxed way they’re responding to the inevitable.

You save what can be saved, help the survivors, and press on.

And, remember, you’re persevering in paradise.

I’ve never been, but we’re all aware of The Aloha State's many splendors.

Volcano’s are just part of the landscape.

Lava or leave it.

Kate Upton in Latrobe: When a supermodel comes to town

The Stephen King-sized Monster from Maine