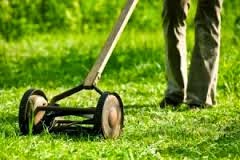 How many times did you do it this summer?

I talked to one friend who calculates he’s done it probably close to 60 times. Says it takes him an hour to do it each time, or about as long as it takes me to do the same thing.

Me, I’ve only done it 10 times. I could have done it more, but that would have cut drastically into other things I’d rather be doing — and that’s just about anything.

I’m talking about mowing the lawn.

I mowed mine for the very last time just yesterday. That makes it a tidy 10.

See, this was the year I’d finally take a full accounting of one of the drearier aspects of home ownership, that of lawn maintenance.

Many readers know about my annual contest with my buddy Paul over which of us will be the last to mow his lawn each year. Whomever can fend off public and spousal scorn long enough to be last to cut wins bragging rights.

This year ended in controversy when Paul’s neighbor got so disgusted with the adjacent savannah, he cut it himself (see first link). Now, that’s neighborly.

But the essence of the contest is based, not in laziness, but logic.

We’re both convinced the later you cut the grass, the less it’ll grow.

We think grass is like a dude hooked on, well, grass. If he needs a hit early in the morning, he’s going to need hits the whole rest of the day.

That we’ve turned it into a childish contest that results in both increased bar time  and infuriating our wives is just a happy two-fer.

But I wanted to extend the theory and see if cutting the grass less would lead to less grass cutting.

I set out to do this four years ago. I enlisted my then 9-year-old daughter. I told Josie I wanted her to mark on the iconic John Deere green hood each time I backed the mower into the garage.

What I didn’t count on was she’d give into an artistic bent and draw more than just a single slash. So now my John Deere has indelible drawings of the dog, of her, her sister, her mother, Selena Gomez and me drinking a beer with “Mr. Stinky” written beneath.

This year would be different.

On the first cutting — May 27 — I put a 4-inch piece of blue masking tape on the hood and marked it with a single slash. It was, I think, the latest I’d ever gone. It’s maybe the latest anyone’s ever gone. I could have gone longer, but the girls were complaining that they kept getting lost in the front yard when they took the dog out for a quick squirt.

I contend it never really looked that bad. A little disheveled, a little unkempt, sure, but the guy who rides the mower looks that way nearly every day, too, and that doesn’t stop him from being seen in public.

But I believe my theory proved true. The less I cut the grass, the less the grass needed cut.

Contrast that with my friend. He enjoyed 50 fewer hours of summer leisure than I. That’s significant.

So is the gas savings. Think about that. I spent maybe $100 less on gas than he did, money that could be spent helping the less fortunate or getting me drunk.

Extrapolate all that to every neighborhood and highway grass crew and it can change the world.

I’ve been saying it for years: A tight lawn is the sign of an uptight lawn owner. Reducing the number of times we cut it is good for ourselves and our planet.

Now, sure, I live in the woods on a mountain where grass growth isn’t as robust as it is down in the neighborhoods below. And I’m not bang up next to some anal-retentive neighbor who can make me look sloppy by maniacally cutting his grass every four days.

But I think this year I’ve proven my point: you’re better off not rushing to cut the grass so often.

And now that that’s done, I plan on applying the same logic to another dreary household task I loathe.

My neighbor, my Deere
Posted by Chris Rodell at 12:02 PM

Email ThisBlogThis!Share to TwitterShare to FacebookShare to Pinterest
Labels: do you have to cut your grass, does cutting grass make it grow faster, how fast does grass grow, John Deere mowers, long toenails