Parade aftermath: what happens to all the helium? 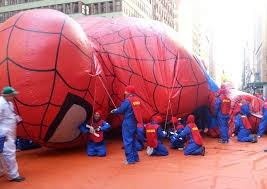 I’d like to see what happens to all that helium.

Helium is probably my second favorite gas behind, of course, “Jumping Jack Flash.”

Sorry. I forgot how the rest of it goes.

My knowledge of helium is minimal. I know it’s colorless and odorless and can make me sound like a cartoon character if I take a big suck of it.

That’s why I’d like to see a special on the parade aftermath.

Does everyone in Manhattan spend the rest of the day sounding like Daffy Duck?

You’d think so because that’s a lot of helium.

A parade fact site said your typical Snoopy balloon is three stories high, as wide as five cabs and about 11 bicycles long — and that’s the first time I’ve ever seen bicycles used as a unit of measurement. I don’t know why they’d do that.

The same site said it’s enough helium to fill about 700,000 Mylar balloons. That’s about half of what we got for my daughter’s 8th birthday.

This was the 20th straight year Linde North America Inc. has provided the helium for the parade. Helium forms underground and is extracted along with natural gas deposits with which it mingles. It is separated, chilled into a liquid for transportation purposes and sold to companies like Linde.

It is one of the most abundant elements in the universe, second only to hydrogen.

So next time you see anyone with a big foam finger claiming, say, the Alabama Crimson Tide is No. 1, you can point out the discrepancy.

Take the great big balloons away and your typical helium salesman is the last guy you want to be cornered by at the neighborhood Christmas party.

I guess it’s my environmental bent that has me curious about what happens to all that parade helium.

Do they recycle it?

They do not. Linde tried that in 2008 and found the process too expensive and wasteful to be of value. So all that helium goes aloft.

Is it dangerous to dispel that much concentrated helium?

It doesn’t seem so. I’ve heard no reports of JFK-bound planes mysteriously being elevated 5,000 feet after being blasted by a helium updraft.

You’d think some of the parade walkers, many of whom are probably a bit gassed up themselves, would want to stroll around inside Spiderman or Sponge Bob and just inhale all that helium.

Me, I’d like to inhale and inhale as much as I could and then hold my breath and see if I could float down the street.

You’d think it would be easy to add some harmless drug mist that would maybe alter behaviors.

It being Thanksgiving, you could put some appetite suppressors in the helium. I know I’d be feeling grateful today, not to mention less bloated.

Or how about adding a hint of nitrous oxide? Imagine how much fun it’d be to watch about two hours of NYC strangers hysterically laughing. It’d be like watching a million Al Rokers without having to endure the tedium of the forecast.

Of course, since Macy’s paid for all that gas maybe the department store could add something that would make people want to shop like crazy and behave like animals in search of bargain specials.

Maybe that’s what they’ve been doing all along.

I’m sure retailers everywhere would think that’s a real, uh . . .

Weatherman is my superhero!

We all love New York
Posted by Chris Rodell at 11:46 AM