A non-streaking story on the comet & the butt 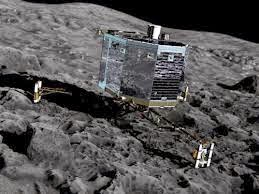 On a day when Kim Kardashian set out to break the internet by posting a picture of her butt, scientists landed a probe on a comet that’s 2.5 miles across. For purposes of scale, it’s a useful coincidence.

The celestial body is just a smidgen larger than the celebrated butt.

The news took my breath away — and we’re talking about the comet now. I’m much more intrigued by the asteroid than the ass.

This is, to me, as monumental as landing a man on the moon. It’s an incredible achievement.

Tom Randall of Bloomberg had a deft analogy in his lead. He said: “Humans just scored an interplanetary field goal. A really long one.”

The 220-pound probe named Philae has been on a 10-year, 4-billion-mile journey to reach a comet named 67P/Churyumov-Gerasimenko, which for purposes of blog simplicity will henceforth be referred to as Burt.

So using Randall’s analogy I guess it would be like someone clearing the uprights in Pittsburgh’s Heinz Field after having kicked the ball from, oh, Manilla?

Another handy analogy: It’s like trying to land one speeding bullet on top of another.

One scientist described it as “sexiest space mission there’s ever been,” which proves how unsexy our space missions have been. Imagine the pay-per-view bonanza if they beamed a space mission that involved actual space sex.

The calculations that went into the bullseye trajectory are impossible to comprehend, especially for those of us who need a smart phone app to figure a 20-percent tip on a $10 tuna fish lunch special (for future reference, that’d be $4.)

Scientists are hoping to find in the comet’s rock and ice insights into the actual billion-year-old origins of the universe.

I think it’d be cool if they found a note with one of my tweets on it.

That would, you’d think, lift my anemic @8days2amish followers count up above 300.

All America should be chagrined that most of the stories about Burt involve men and women named Dieter, Siegfried, Helga and other scientists who go to work in a town called Darmstadt.

Yes, this achievement is a mostly German show. NASA’s contributing, sure, but this is all being done under the auspices of the European Space Agency.

When did we take second fiddle in space achievement to Europeans?

Taking second fiddle to Germans in violin is one thing. Check out Georg Kulenkampff  (1898-1948) ’37 recording of Schumann’s “Violin Concerto in D Minor.” The dude could fiddle.

I guess it’s symptomatic of Americans’ now knee-jerk disparagement of anything as elite as factual science.

I can’t imagine the U.S. Congress ever again appropriating funding for something as esoteric as space exploration.

“You want to spend $10 billion on a space probe to a what? A comet? Can we frack it? Can people play golf there? What’s the point?”

The point is it elevates and inspires mankind whenever mankind does anything to vanquish the ignorance of mankind.

We don’t yet know what we’ll find there. But we will learn. And another generation of children will marvel at the magnificence of accomplishing something that seemed impossible.

Who knows what they’ll achieve?

But they will cite as inspiration, I’m sure, the day when mankind finally began to grasp a sphere at which people have for so long gazed in wonder.

And that’s as good a place to stop as any because it sounds again like we’re back describing the Kardashian moon.