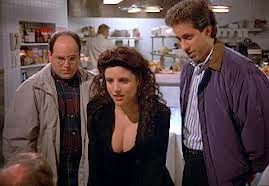 (923 words)
I contend my superhero power is an ability to ignore even massive cleavage when it is shoved right beneath my nose.

I always maintain strict eye contact and never allow my vision to drift south to the tender bosom that has led to the carnal destruction of so many weaker men.

I do this because leering at even a deliberately exposed bosom can be misconstrued, because an observant boyfriend might be watching, and because it cedes power in the male/female sexual dynamic.

Proof of the latter was evident in a funny “Seinfeld” episode when Elaine Benes lured Russell Dalrymple into staring at her cleavage and the weak moment led to the personal and professional demise of Russell Dalrymple.

Two things this week reminded me of the wisdom of this superheroic skill.

The first is that video of Pittsburgh-native Shoshana Roberts, 24, walking the streets of New York and enduring a barrage of come-ons, leers and unwelcome attention.

If we weren’t being told to avert our gaze, I’d describe it as eye-opening.

It’s caused a firestorm of comment from folks who say it’s evidence of the blatant harassment.

Those people are correct.

The other half say the woman should feel complimented and that homelier individuals would welcome such attention.

This is the story of the topless woman and what happened when her pussy hid the Christmas Pickle.

As you’ll see, there are elements of that sentence that can be misconstrued.

See, there’s this wonderful cigar shop on Pittsburgh’s South Side. I’d been telling my New York buddies about it for years.

The chairs are a hodgepodge of donated old leather Easy Boys that become filled by the butts of judges, plumbers, politicians and area sports figures. There’s a barber chair or two. People bring in their own drinks and there’s often a potluck buffet.

“But I have to warn any of you who might be feeling prudish, there have been times on Saturdays when one or two topless girls are in attendance.”

“You mean strippers?” one asked.

“I do not. They don’t do anything provocative. They just sit there and chat without their tops on.”

One of them asked if a busted thermostat made it warm enough that toplessness reasonable. He wondered if it was hot in there.

If any of my New York friends were, indeed, feeling prudish they managed to conceal it for the harmonic well-being of the group.

I want to stress that the chance of seeing a topless girl through the smoke was not the incentive for going there. We’d have gone there anyway and we’d have had just as great a time without a topless girl.

But there she was.

And there they were.

Even in this atmosphere, I maintained my steadfast ability to maintain eye contact with her during conversation.

I confess, when she’d turn away, I did steal a look or two. After all, I’m not made of wax. I am a flesh-and-blood man.

The conversation was friendly and engaging. She said she and her newlywed husband — and the story of their raucous wedding will have to wait for another day — had already decorated their Christmas tree.

I told her I thought she was jumping the Christmas gun.

Me and my friends, even the love-starved ones who’d been mesmerized by her hooters, looked quizzically away from her nipples and at one another.

She told us how hiding the Christmas pickle was an old Pittsburgh tradition. Every year someone gets to hide a decoration that looks like a pickle and whomever finds it good luck for the rest of the year..

“We’ve looked everywhere and can’t find it. We think the cat took it. I can’t believe you guys have never heard of it. You must not be from around here.”

Well, I said, I’ve lived here nearly all my life and I’ve never heard of the Christmas pickle.

She rolled her eyes and looked right at me. This sweet young woman who was topless in a public establishment on a busy Saturday afternoon stared at me like I was some kind of weirdo.

I just stared back, my eyes never leaving hers.

I wish women who didn’t want to be stared at never had to feel uncomfortable, but I do blame some of this on New York sidewalk etiquette. But I blame the swingin’ New York atmosphere, not the New Yorkers who are, by nature, a loquacious and observant bunch.

Afterall, I had five New Yorkers with me and a topless woman in a Pittsburgh smoke shop and none of them got in trouble for what was once called “reckless eyeballin’.”

I wish such harassment did not exist. But I wish the same about people who spit their gum on the sidewalks, too. Prejudice, hatred, injustice — the list of things I’d like to change about this misbehaving world is long and detailed. Yes, the list includes eliminating randy comments to women who deserve our respect, but it’s not a priority.

I’m just a flesh-and-blood Pittsburgh guy who can’t even find his Christmas pickle.