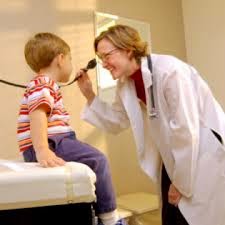 The most disturbing revelation to arise from my first physical in 18 years had nothing to do with my health. No, it was that the father of the doctor who was caring for me is 2 years younger than her patient.

She’s not actually a doctor yet. She was the doctor-like person with the stethoscope who came in and asked me a lot of questions so she could brief the actual doctor before she swept in to earn the really big bucks.

I was, I know, the talk of the office. It started with the admitting nurse.

“We have no computer records on you,” she said. “Why is that?”

Well, I haven’t been to see a doctor since before there were computer records. It’s been 18 years.

I haven’t been sick.

“You mean in 18 years you’ve never had an operation, needed any prescription drugs or felt sick for even a single day?”

Not if you don’t count hangovers.

“You’re a miracle,” she said. “The doctor’s going to get a kick out of meeting you.”

All this giddy stir and I’d yet to even remove my pants!

I’ve been reluctant to share this news because I know so many people struggle with chronic pain and severe illness and I didn’t want to seem like I was gloating. Why some people are sick and others not is a mystery and it often seems so terribly unfair.

It’s not something about which to joke.

Secondly, avoiding doctors for nearly two decades is potentially fatal. What if I was suffering from, say, catastrophically high blood pressure or another easily detectable disorder that would prove me a doomed fool?

Third, I couldn’t afford to be sick. I’m one of those Americans who gambled I’d always be healthy because I didn’t earn enough money to pay high insurance premiums. That all changed last year when affordable health care became available.

And thank you for that, er, Sen. Mitch McConnell!

In the examination room, the young pre-doctor doctor began her lengthy interrogation.

She asked about my family history. I told her Mom has been cancer-free since 1982, has dementia now and that Dad dropped dead of an aortic embolism in 2004. She was very polite and said she was sorry.

“Oh, don’t be,” I said. “It was an outstanding death. He was 76 and was complaining of back pain in the morning and was gone that night. It was like hitting the death jackpot. I only wish Mom would be so considerate.”

She asked about my exercise. I told her I enjoy taking long walks at a moderate pace. I told her my theory that most men my age suffer the most serious injuries in vain pursuit of improved health. They snap a tendon playing basketball or take a nasty fall when they’re out for a brisk evening run.

She asked about my diet. I told her my paunch is becoming a concern and I need to be more vigilant about portions and stop being a handy garbage disposal for the kids who leave food on the plate; too much to toss, but not enough for leftovers.

She asked if I smoked.

I told her I enjoy one or two cigars a month. No cigarettes, ever.

No coffee. But always iced tea with lunch.

“More than I should, but not as much as I’d like.”

“No, about two nights a week.”

Has your drinking ever hindered your work?

“Well, I’m a blogger so there’s really no way to tell.”

Has anyone ever suggested you drink less?

“No, in fact, outside of my wife, everyone I know suggests I drink more. Without fail, every time I try and leave a bar, someone always says, ‘Oh, have one more! I’m buying!’ That makes leaving awkward. If I could have figured out a way to get paid to drink I could have afforded regular doctor visits years ago.”

I’m a very social person who by dint of my calling, spends nearly all his time all by himself deep inside his own head. No co-workers. No human contact. If it goes on too long like that, it is truly maddening and I feel like running out on a street corner and screaming.

Instead, I walk down the stairs and Dave pours me a draft and my mental balance is restored. Drinking, I know, is a curse to many individuals. To me, it’s therapy.

I was very pleased when she began asking me a lot of questions about sex. Then I realized she wasn’t asking for personal reasons.

But I answered all her questions truthfully. The reason I won’t share the answers here is because I wouldn’t want to embarrass Val and, gee, bragging always comes off as unseemly.

It was all going so well until she nearly toppled over while testing my leg strength.

“I don’t usually need to do this seated, but I hurt my leg the other night and I’m having trouble bending over.”

I’m sorry, I said. What happened?

“I took a nasty fall when I was out for brisk evening run.”

We both laughed. She was very friendly. I told her part of the reason I’m getting a physical right now is I’m looking for a good young doctor who’ll shepherd me right through to the grave. She’d have been perfect, but she’ll likely leave Latrobe when her obligations here are fulfilled.

It’s a pity. She’s going to be a great doctor.

I was there for about two hours, answered several hundred personal questions, was poked, prodded, told to breathe deeply and say, “Ahhh!”

They checked my blood pressure, reflexes, circulation, weight, etc. I need some blood work done and am weighing whether to succumb to the indignities of their recommended colonoscopy, but it couldn’t have gone better.

They didn’t suggest any changes to my diet or say I ought to quit drinking.

In fact, I think after seeing me they might start suggesting to sick patients that they ought to drink more!

The admitting nurse told me they spend about 70 percent of their time treating people who need no treatment. They’re conditioned to whenever they feel a phantom pain rush right to the doctor and plea for pills.

I wonder if in the last 20 years, through the ceaseless ad blizzard about pharmaceuticals, competing health plans and mega-hospital patient incentives, we’ve forgotten that we can be can be our own best primary health care providers.

“Well,” the doctor said, “I don’t get to say this often, but you’re perfect. Whatever you’re doing, keep doing it!”

I wonder if a big part of my perfection is that I’ve spent that last two decades rambunctiously living while steadfastly paying no fret to all my many imperfections.

As is my habit, I’ll be at the bar this evening laughing with my friends.

I promise I’ll raise at least one glass with you in mind.