Renaming snow-bound Buffalo (and other cities) 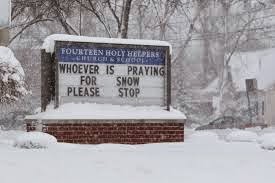 I think in the interest of accuracy it’s time we rename Buffalo. Let’s call it Uninhabitable, New York.

The only silver lining I can see is that the city need not worry about any more lake effect snow.

They’ve already exceeded their typical snowfall for the rest of 2014-15 winter, which in Buffalo ends, I think, July 5, or two days before the winter of 2015-16 begins.

I’m horrified by what I see from western New York. It, to me, looks like hell.

By now, other cities would be making snowmen

In Buffalo, they’ll be making snowGodzillas.

Even the almighty NFL is canceling the Sunday Bills game.

This is the organization that 51 years ago this week played ALL its games in the wake of a presidential assassination that left many fearful the Soviets were preparing a full scale nuclear attack.

So you have the threat of mutually assured mass nuclear destruction being less threatening to human life than snow in Buffalo.

I understand a sentimental attachment to the land on which you were born, but not when that land is buried under 7 feet of snow.

That’s why, truth in advertising, Buffalo should be required to change its name to Uninhabitable.

It would let people know not to move near there unless you’re skilled in igloo construction.

Of course, Buffalo’s not the only city that ought to be renamed.

For years, I’ve been arguing New York should change its name to New And Improved York. I love spending time in New York and remember what it used to be like back in the bad old days when making a “good impression” meant leaving a really deep dent in the skull.

I’ve never felt Los Angeles was a good name for a city where so few angels dwell, but the truthful alternatives — Los GangBangers, Los LousySequelProducers — are clunky.

But the city is home to more angelic looking men and women than any place on the planet. That these people are uniformly duplicitous and conniving gender-neutral whores factors, too.

That’s why Los Angeles should be Loose Angeles.

I understand Boise, Idaho, is a beautiful town. One story says Boise comes from an exclamation a French-speaking guide had when he spied the verdant valley over the rugged mountains.

I read that and thought of the late actor Herve Villechaize. I intend to do some research and see if a similar anecdote exists about the guide who named Ze Plains.

But Boise’s always struck me as sexist, and changing the name to Girlse wouldn’t help.

Latrobe is named after Benjamin Henry Latrobe, the architect who in 1812 rebuilt the U.S. Capital after the dastardly Brits burnt it down.

That brings us to Pittsburgh.

If ever a town’s been in need of a new name, it’s the city closest to my heart.

Nothing described with the word “pit” is desirable.

No one’s ever said, “Hey, I found a really great pit! Bring a bottle of wine, some sandwiches and we’ll have a pitnic! Er, I mean picnic!”

Let’s face it, most pits are the pits and that, to me, includes actors named Brad.

Pittsburgh was in 1758 named by Gen. John Forbes in honor of his friend William Pitt, who decreed that it shall be called “Pittsburgh for ever.”

I think just to mess with people Mayor Bill Peduto should decree that henceforth Pittsburgh will be spelled Pittsburghh and that we’ll will be adding an additional “h” every 10 years until the year 2054 when we’ll forever be Pittsburghhhhh.

I have an even better idea.

Let’s put Pitt in the pit and bestow the city with a transcendent name that perfectly depicts how we’ve dealt with ups and downs and the jokes of lazy poets who realize that Pittsburgh rhymes with a scatological pejorative.

It’s a name beloved by all of us.

This would be the perfect way to honor screechy sports announcer and the inventor of the Terrible Towel, Myron Cope.

In Pittsburgh, we not only do cope, we love Cope. Our love for him will never be surpassed. He was warm, hilarious and philanthropic (and he was one hell of a writer, too, a fact that’s often overlooked).

So join me in declaring that Pittsburgh is from now on Copesburgh!

Oh, who am I kidding.

The idea doesn’t stand a snowball’s chance in Uninhabitable.

I guess when it’s put that way, it just might work after all.