Arming our educators to educate ourselves 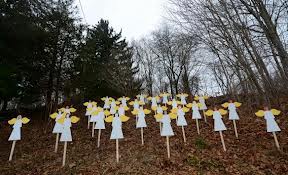 (769 words)
If teachers had been armed when I was a kid, I’d never have made it out of 8th grade and Mr. Nee would still be serving life for murdering a 14-year-old.

See, it’s against the law to murder even obnoxious kids.

I have great admiration for our elementary school teachers, even more now that we’re considering asking them to be proficient with lethal weapons while simultaneously ensuring the cookies Timmy and Suzy get are gluten free.

Just this summer Wayne LaPierre of the NRA terrified gun lovers on the Mayan-sounding prediction that the re-election of Barack Obama “will fundamentally change America as we know it.”

I heard that and, thought, hallelujah.

On the issue of guns, America needs fundamental change and I believe it’s coming.

I believe we’re about to break the lethal all-guns/no guns deadlock that’s been killing us in vast numbers for the past 20 years.

I think armed teachers will be part of it.

A teacher with a gun in a room full of darling first graders -- and I’ve got one of those -- could be the template for how we move forward to pragmatic solutions to so much bloodshed.

Because, as parents, none of us would want a teacher with a loaded gun in a room without taking sensible precautions.

He or she would need to comply with the “well-regulated” stipulation that for some reason is disregarded by those who revere the 2nd Amendment.

In short, he or she would need to know about 90 percent more about gun ownership than your average gun owner.

And therein lies the problem.

I know hundreds of them.

Their guns define them. They believe if everyone owned guns there would be a lot less killing. They believe guns are essential to homestead safety.

They have yet to come up with an answer why having such a handy arsenal didn’t save the life of Adam Lanza’s mother, but give them time.

These men are more like Joseph V. Loughrey than my late father. My old man died in 2004 at the age of 76 having never fired a gun much less owned one.

I don’t remember asking him about it but I know he thought guns were dangerous. He loved his family and would have done anything in his power to protect us.

That, I guess, is why he never owned a gun. He was satisfied the odds of him needing a gun to protect his loved ones were far lower than the odds of a gun mishap killing him or one of us.

In that respect, I guess he was vastly different from the aforementioned Loughrey.

I sense Loughrey was one of these gun hombres who are still contending even common sense gun legislation will result in a slippery slope and end with that Muslim tourist in the White House confiscating everything but their slingshots.

Loughrey, 44, on December 8 killed his 7-year-old son, Craig, outside a Mercer, Pennsylvania, gun shop with what I call an oops bullet.

He thought the 9 mm pistol was empty. It wasn’t. It fired a chambered bullet right through his son’s chest, killing him in his car seat.

I doubt Loughrey had the kind of training that would be mandatory with armed teachers, but I’ll bet, man, he sure loved guns.

Many of you have forgotten, but Mark David Chapman wasn’t the only man obsessed with killing a Beatle.

Abrams on December 30, 1999, broke into Harrison’s English manor and spent 15 minutes savagely trying to kill him.

It took just four seconds for Chapman to kill Lennon.

Nothing kills like guns and the proliferation and deification of them is killing us all.

That’s why I’m hoping our first grade teachers, people upon whom we rely to educate so many on the little common sense civilities that are the glue of a healthy society, can lead the way on educating gun mad America about sensible gun regulation.

Who better than the people who remind our children to say please and thank you to help us to stop looking for so many answers to so many problems with so many guns.

• What do tiny coffins cost?
Posted by Chris Rodell at 2:50 PM