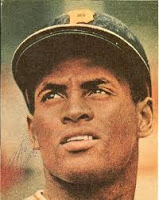 Forty years ago this evening, the great Roberto Clemente died. His is a story that cannot be shared often enough. Here's what I wrote about him in 2011 the day after Derek Jeter passed Clemente on baseball's 3,000 hit list. Yeah, it's about a baseball player. But it's about so much more.

("Tweets of the Year" later today!)

The overloaded flight crashed in the Caribbean shortly after takeoff from Puerto Rico.

The man who died last on one famous list lives first forever on so many, many more.