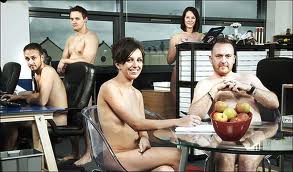 (897 words)
I’ve started locking my door when I’m at work. This is in opposition to my stated vow about having an open-door policy when I began renting the place five years ago.

It’s $150 a month and you can’t beat that. Even better, my landlord tells me every couple months I should only pay when I feel like it: “Look,” Dave says, “if you’re having trouble don’t worry about the rent. Pay me what you can, when you can.”

Dave rents three apartments above his bar. He knows having a thirsty idler like me so near makes good business sense: His bottom line improves the more my bottom is lined up near his taps.

And being here makes me very happy. It’s like having a little clubhouse or like spending eight hours a day inside my very own scrapbook.

Most people with traditional offices decorate their desks. My decorations start at the ceiling and work down to the berber.

It’s really very cool. You can come and see for yourself December 21. Yes, I’m restoring my Christmas party, which I’d canceled the last two years because the first was too successful.

More about that tomorrow.

It’ll be fun and I promise to be fully clothed.

As previously mentioned, I’ve worked for years with an open-door policy. In fact, I even had a motto: “My door is always open, my toilet seat always up.”

I wanted people to know that this was a place where guys could feel comfortable, something I never get to do at home.

My daughters don’t want to see me naked. Hell, most days neither does their mother.

So there’s like a 10-minute daily window when I shower and somedays shave where I’m relaxed and au natural, something you just don’t often see in conventional offices that aren’t, I guess, in places like Capitol Hill.

In all these years, only two people have taken advantage of my hospitality and barged right in. And by that slim sampling, the consensus must be that I work in the nude.

Yes, the only two times people have entered without knocking, I’ve been buck naked.

Happened a couple of years ago with Dave. The faucet in the bathroom sink got stuck on full. It sounded like I was launching a space shuttle right above the kitchen.

I called Dave and said to come up when he had a moment and bring a wrench. My belief that I had time to shower proved in error when Dave came running in like a teenage girl who’d heard Beiber was in my tub.

And there I was.

It would make a better story if I said our eyes locked, we rushed forward, embraced, and our legs bent at the knee they way the do in all the old Cary Grant movies.

But we just cracked up and I grabbed a towel.

My reaction was completely different on Monday when an idiot friend of my jackass neighbor came in without knocking.

I was naked with shaving cream all over my face when I looked up and saw this dude standing there in my kitchen.

I just started screaming profanities at him, which I know is at odds with my open door policy.

But there I am, naked. Saying, “And what can I do for you, stranger?” I don’t think would have set the proper tone.

The guy is friends with the neighbor who’s sort of a charity case Dave doesn’t have the heart to evict. So the guy mumbled an apology and split.

And I locked the door and locked it’s going to stay.

I began to wonder how I would have handled the situation if it was a hot babe, and I have some experience with that.

It was in college in the old fraternity house where I lived with about 15 other guys who excelled at things like farting and fun.

It was once again a shower situation. I was standing there naked in front of the dresser wondering if it was time to get around to pairing my socks when I heard a knock at the door.

“Yes?” I said, pushing shut the drawer and turning around.

In walked my buddy’s girlfriend.

And she got the full monty. I didn’t flinch.

She gave the boy a good long look and then just slowly backed out, a playful little smile on her face.

I knew right then I could have snaked him anytime I wanted, but the guy was a buddy and I think he owed me something like twenty bucks, which I’d have had to kiss goodbye when he busted me screwing his girlfriend.

I was really quite an idiot. Twenty dollars is very cheap for sex.

I guess I was just old-fashioned.

Of course, now I’m married and the only people who see me naked are my wife and rough strangers who seem incapable of differentiating between the numbers “2” and “3” on apartment doors.

So if you come to my Christmas party next Friday, I’ll assure you I’ll be fully dressed.

That gives you seven days to come up with a good reason to get me to change my mind.

• Randy Travis & the perils of driving while naked

When decorating for your holiday shindig, either wear shorts when you hang strings of lights on your tree or make sure there are no open sockets that could send an electric burst of no no no to your ho ho ho.

Just curious about your frat brothers. What's the difference between an excellent farter, and a run-of-the-mill, mailed-in-his-performance farter? Sound? Subtlety? Variety of fragrances?

When you two respond with trademark wit to something I've written, I know I've done my job. Thanks, men!

And, by the way, fart excellence has nothing to do with aroma or sound. It has to do with flame! It's something to see!