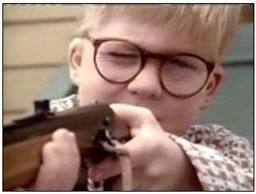 (714 words)
We have become so calloused to gun violence that this week we as a nation roared with laughter after a 9-year-old untrained in firearm safety was nearly deprived of his vision after a ricochet bullet struck him in the face.

It’s not like we all didn’t see this coming.

The boy was warned over and over.

Yet in the end, we all just sat there and watched it all unfold.

And Ralphie nearly shot his eye out.

I’d like to get Wayne LaPierre’s take on “A Christmas Story.”

But that’s Hollywood for you.

LaPierre may be the only man in America who could watch the classic coming-of-age movie and hammer it into a lesson that is at once pro-gun and anti-Hollywood.

It would be fun to hear his take on how shows like “The Grinch Who Stole Christmas” would differ if Cindy Loo Who had a Glock tucked in her jammies.

Did you see him on “Meet the Press” Sunday? I tuned into to see if the Sandy Hook tragedy would jar him into a moment of thoughtfulness, perhaps some consideration that maybe it might be prudent to tinker with a law or two to affect some change.

How silly of me.

I guess we shouldn’t be surprised that the public face of the National Rifle Association stuck to his guns.

Most of America’s law abiding gun owners need to understand that most of us who are distraught by the unholy rise in gun violence aren’t opposed to the National Rifle Association.

It’s the National Assault Rifle Association that give us the willies.

The former was founded to promote gun safety and represent the interests of sportsmen. I’m all for that, although I prefer the company of sportsmen who bowl.

The only way a bowler is going to accidentally hurt someone is if he or she drops the ball on your foot.

LaPierre’s group should now more accurately be called the NARA because their sole focus is to scare people into buying bigger, more lethal weapons from the gun makers who provide the bulk of their funding.

LaPierre -- and one of these days conservatives are going to wise up that the man’s name sounds, ick, kind of French -- kept saying there are too many convicted felons still caught committing crimes with guns, like that was the main topic.

Let me cut the chase here: He wants to focus on black hoodlums involved in the urban drug trade. The black-on-black gun violence is an on-going national crisis.

This is bound to sound on its face discriminatory, but white-on- (mostly) white gun violence is worse because it’s so bloody indiscriminate.

LaPierre is trying to scare dainty whites into believing they face a clear and present danger from urban violence. He’s saying you need a really big gun because a lot of black people have them.

My fears of my wife or daughters getting killed by an angry armed black man involved in the drug trade are low.

My fears of them getting killed by an angry armed white man when they go to the movies or school or a mall are high.

Again, if you think this isn’t a problem that can’t be solved, in part, by addressing some common sense gun regulations then you are part of the problem.

I’d like to see a world where Ralphie’s old man played a reasonable role in deciding who gets what kind of guns.

Before giving him the Red Ryder BB gun, he repeatedly warned his son he’d shoot his eye out.

The NRA is likely opposed to gun dealers issuing such common sense warnings.

They don’t seem to care who shoots your eye out.

Just as long as someone’s shooting something.