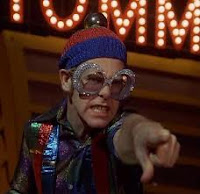 The Scriptural implications of the Steeler loss are too immense for me to tackle here, especially in the wake of an afternoon full of poor tackling.

So instead of a typical post, I’m going to open the floor up for questions.

And wouldn’t it be fun if anytime anyone said they were going to open the floor for questions, the floor actually opened up and all the questioners fell screaming to Hell?

Anyhow, the floor is now open for questions: watch your step.

Q: How depressed are you over the Tim Tebow-led Bronco upset of your hometown Steelers?

A: Hardly at all. It was an outstanding football game. The Steelers have won six Super Bowls in my lifetime and will surely win again. As a fan, my cup runneth over -- and so do the three Stanley Cups and I’ve seen the Penguins win. I refer you to last year’s take when the Steelers lost to Green Bay in the Super Bowl if you’re interested in my thoughts on disappointment.

Q: Your thoughts on Tebow throwing for 316 yards, a numeric reminder of his favorite Bible passage, John 3:16?

A: Love it. It’s a nifty reminder of the Bible’s most beautiful promise: “For God so loved the world that he gave his only Son, that whoever believes in him should not perish but have eternal life.” Let me be the first to point out that the final score could refer to Proverbs 29:23, “A man’s pride will bring him low, but he who is lowly in spirit will obtain honor.” I interpret that to mean monster Iowa offensive tackle Reilly Reiff will still be available when the Steelers draft 24th.

Q: Do you have any opinion on the complicated new NFL overtime format?

A: It’s my understanding that it’s no longer sudden death and that both teams get a shot at scoring unless they don’t. The format took four times longer to explain than the actual overtime took to play. It proves once again the NFL is ruled by people who love rules.

Q: Are there any historical precedents for Tebow’s feat?

A: Yes, two. The first is Franco Harris’s 1972 Immaculate Reception; and the 1984 “Hail Flutie” pass that allowed Doug Flutie and Boston College to beat the University of Miami. The Tebow play has the same sort of indelible wow feel. It’s the heart of what makes watching sports so special.

Q: What about the Tebow naysayers? None has been more critical than one of your favorite old Steelers, Merrill Hodge. What would you say to him?

A: His mea culpa should be public and along the lines of an obscure old Don Schlitz country song called, “Six Words.” It’s about what a married man should say when he’s been caught redhanded making a terrible mistake: “I’m an asshole. It’s my fault. I’m a worthless slug in deed and thought. I’m so grateful deep down I got caught . . . ‘cause I’m an asshole and it’s my fault.”

Q: A little harsh on Hodge, aren’t you?

A: No, harsh will be what he experiences when he walks through every restaurant or airport for at least the next four months. His criticisms of Tebow seemed bitter, petty and somehow personal. What good would sports be if we didn’t allow for the possibility that sometimes magical things can happen?

Q: Are you saying what happened with Tebow was magic or miraculous?

A: What I’m saying is the Lord moves in mysterious ways. And so does Tebow whenever he’s flushed from the pocket.

A: There are times he looks with a football like I look when confronted with a question involving math: he’s confused, he looks like he needs help, he acts as if he’d like to toss the thing in the air and run the other way. But that just makes it that much more entertaining when he completes an actual pass, sort of like when I can calculate a tip without electronic assistance.

Q: Did Tebow beating the Steelers inspire you to hum any spiritual hymns?

A: No, but I can’t get “Pinball Wizard,” the Elton John version, out of my head. I think we can all agree when it comes to football, that deaf, dumb and blind kid sure plays a mean pinball.

Q: Still think there’s a chance that Tebow might be Jesus, as you wrote two weeks ago?

A: I’m not saying one way or the other, but I hope my graciousness in defeat will be something he’ll remember on Judgement Day.

Q: Well, that’s a surprisingly Scriptural take from you on a football game. Anything else?

A: Yeah, remember that John 11:35 verse, “Jesus Wept?” It has me wondering if He bet the Steelers.

Q: So I’m to take it you’re rooting for Tebow and the Broncos to beat the Patriots?

A: Certainly, and for ironic balance I’m hoping in victory he throws for precisely 666 yards.

Thanks, Tia! Yeah, I've been telling that one everywhere. Happy New Year!