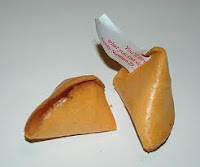 I posted 65 tweets in the past 40 days. Sometimes I’d go two or three days without posting anything and then have a burst with about five dandies in two hours.

I could probably do more, but tweeting these cerebral sorts of fortune cookies is even less consequential than deadbeat blogging.

But I do enjoy it. It’s like web graffiti. Plus, as I’ve mentioned, a lot of tweets lead directly to blog posts.

I was ruthless in cutting out weak tweets this month, renewing my vow to never let my total rise above 1,001 tweets. I shaved off more than 150 weaklings. One day I will have the only Twitter account with the essence of pure Tweet.

And won’t that be something!

Try and guess which of the following 25 won’t make the cut six months from now. Hard for me to say. I think this is a strong bunch.

• Tim Tebow's inexplicable gridiron success is the greatest miracle since Cosmo Kramer dropped that Junior Mint in the guy's abdomen.

• Call it a gamble, but I'm off to Kmart to purchase thousands of dollars worth of electronics in the hopes some layaway angel bails me out.

• I can see people 500 years ago thinking earth was flat. Then understanding it's really round. But did anyone ever suggest it was cubic?

• New rules aimed at giving pilots more sleep will ensure they’ll have more time to go out and party all night long.

• Will & Kate seem so friendly and engaging I half expect they're going to show up at my house on Christmas just to say hey. Better tidy up!

• How come you never hear of a kid named Santa? It's a great name with cheerful connotations. Only other name so culturally embargoed? Judas.

• Hoopla over Kim Jung Il's death has me confused. I thought Rudolph was the 'deer leader.

• Since the group formed in '72, The Marshall Tucker Band has featured 27 members, none of them named Marshall or Tucker.

• Pundits refer to Ohio and Pennsylvania as swing states. But Wisconsin has the most playgrounds per capita. It's THE swing state.

• Pittsburgh, Jan. 7, 58 degrees. In 10 years there will be indoor winter theme parks where parents will take kids to experience snow, cold.

• The Lord moves in mysterious ways . . . and so does Tebow when he's flushed from the pocket.

• Tebow throws for John 3:16 against my Steelers. Good for him. Now I hope he throws for 666 against the hated Patriots.

• Wondering how long before our smart phones can shoot bullets or our guns can take pictures. Seems some redundancy there.

• Friend says in four months the new Christmas will be August 14. That's the day Tebow was born on in 1987.

• For reasons of global preservation, the Doomsday Clock should be subject to Daylight Savings Time.

• In honor of the annual Super Bowl nonsense about to swamp us all, my phone number in Roman Numerals is DCCXXIV CMLXI MMDLVIII. Call me!

• Just came to me: Superman would sometimes escape wearing an S cape. Alas, this is destined to become my e=mc2.

• I hope next year's Tebow is like this one in every way except that he's either Muslim or openly gay.

• When Yosemite Sam says, "Say your prayers, rrrrrabbit!" does Bugs Bunny pray to the same God as you and I? Or is He animated and voiced by Mel Blanc?

• Does it make me liberal or conservative if Jimmy cracks corn and I don't care?

• Parenting advice from Elton John I consider sound enough to follow: Mars ain't the kind of place to raise your kids.

Thanks for reading. Now go ahead and take the rest of the day off and, yeah, tomorrow, too. Weekends rule!

Speak For Yourself Part 1: I kinda doubt that you and I pray to the same God.

How could I forget about Mars, Pa., John? Geez! Thanks for the reminder. I did a story about the place last year for msnbn.com. Google if interested.

Thanks for checking in and rattling my wonder about the differences between the gods we worship.