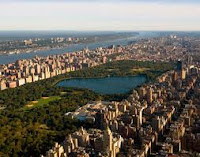 I used to go to New York City so frequently that hick tourists would confuse me for a native and ask me how to get around.

And, like a native, I’d confidently rattle off detailed directions even when I had no idea of where the hell I was sending them.

I have two sets of friends who will soon be among the city’s 50 million annual visitors enriching New York with $47 billion in tourism dollars. One asked me for some friendly tips about things to do, which I’m happy to rattle off even as I have no real idea of what the hell I might be getting them into.

I do this because I’m an enormous fan of New York City and believe Americans should revel in it every chance we get. It has a vibrancy no where else can match.

I don’t know if I could live in New York, but I do know I can’t live without it.

• Offer Keanu Reeves pizza -- In Hollywood you see the cars carrying stars. In New York, you see stars. They are everywhere. I’ve seen Mike Meyers on the subway, Sarah Jessica Parker in Central Park, and Regis Philbin at the Guggenheim. And I saw Keanu signing a couple autographs on the sidewalk outside the RIHGA Royal Hotel when I was returning late one night with a pizza. I asked if he wanted a slice. He said, “No thanks, man, I just ate.” He may have been lying, but he was so cool about it I can almost overlook how many lousy films he’s made.

• Stay at the world’s greatest hotels . . . for 60 minutes -- One of my favorite things to do in New York is stop in heirloom hotel lobbies like the Waldorf=Astoria. I wrote this story that ran in The London Independent about how spending an afternoon touring hotel lobbies is one of the great hidden treasures of visiting New York. You may not be able to afford to stay at The Waldorf, but you can certainly afford a cocktail there.

• Eat or drink something wildly extravagant -- It was at the lavish rooftop bar atop the Peninsula Hotel on 5th Avenue in 2000, a few years before Rolling Rock vamoosed Latrobe, a crime that instigated my irrevokable lifelong boycott. I ordered two 12-ouncers and tossed a $20 on the bar. It wasn’t enough. They were $11.75 each. The day before, I’d paid 75-cents for one just down the street from the brewery. The $23.50 plus tip was worth every penny because I’ll tell that story the rest of my life. It goes without saying, of course, you should splurge on one really long and lavish lunch: three hours and at least two bottles of wine.

• Split it up, couples -- Every couple should build in a little alone time in New York. The girls can go shopping and the guys can smoke a cigar at Florio’s Grill & Cigar Bar in Little Italy on Grand between Mott and Mulberry. Here’s my 2008 story about the history of cigar smoking in New York.

• Walk the Brooklyn Bridge -- In a city of icons, this one often gets overlooked. But taking the pedestrian promenade above one of America’s greatest bridges on a sunny day is a strolling splendor. Do it at lunch and you shouldn’t have any trouble getting a seat at The River Cafe just below on the Brooklyn side. It’s where Johnny Sack and Paulie Walnuts discussed family business in “The Sopranos.”

• Dim Sum -- I never visit Manhattan without stopping by Chinatown and Little Italy, two Lower Manhattan neighborhoods that remain the immigrant essence of New York. Dim Sum is a feast so affordable it must not be missed. I like to follow that up with some alfresco red wine on the Mulberry Street, sight of many famous mob hits.

• At least two drinks in every tavern -- The people who tend bar in New York are some of the most interesting on the planet. They make dirt, yet choose to live in one of the world’s most expensive cities. Order one drink and they won’t waste their time on you. The second drink friendlies them right up and lets them know you’re there for more than the Statue of Liberty.

• Central Park -- One of my favorite things about the character of New York is that right there on that island, the priciest real estate in the world, is a non-commercial park so big it can be seen from space. It’s a testament to a driven city that doesn’t overlook quality of life issues. I’ve been through here a dozen or so times, to the museums, the zoo, the ice rink, to the old Tavern on the Green restaurant (now a gift shop) and I still see fresh wonders every visit.

• Squeeze in as many touristy things you can -- Do the Statue of Liberty, Ellis Island, The 9/11 Memorial, a Broadway play, ask the cabbie what he misses most about home and what he loves most about America. Never forget: you’re a tourist. Tour!