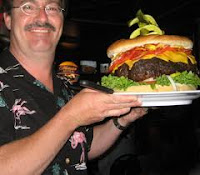 I suppose somewhere there is a group of stylish men who tomorrow will gather to discuss philosophy, the arts or maybe play some invigorating rails of squash.

But that ain’t my crowd.

So tomorrow I’ve accepted an invitation to roadtrip with my circle of friends to a more elemental pursuit where the only squashing being done will involve an industrial quad set of Monroe shock absorbers.

Tomorrow, me and six or so friends have hired a van and a sober driver to take us to Clearfield, Pennsylvania, and Denny’s Beer Barrel Pub, home of the world’s biggest burger, The Yee Olde 96er.

That means we’ll probably scratch about four of the seven deadly sins off the list by around noon.

Denny’s is often profiled on shows featuring consumptive missions impossible. The friendly tavern has been shown on David Letterman, The Food Network, The Travel Channel and dozens of other specials about competitive eaters.

It’s one of those bucket-list destinations that people are drawn to like the Grand Canyon.

Driving there about two hours from our home here in Latrobe is something my friends have discussed for years. This week they decided to go.

That meant I had to go.

Because I helped create the World’s Biggest Burger -- and by “create,” I mean I wrote a short story that helped publicize it around the world leading to mass exposure for a tiny central Pennsylvania tavern that has then on its own risen to global prominence.

But let’s not be picky.

It was in 2002 when I read a story in the Pittsburgh paper about the tavern with the six-pound hamburger -- and I wonder if that guy’s presumptuous enough to be walking around bragging that he helped “create” the phenomenon. Jerk.

It was among the last of more than 1,000 swashbuckling stories I ever wrote for National Enquirer.

Owners Denny and Jean Liegey started offering these meat monsters and challenging daring gluttons to eat the burger in 90 minutes. His quote from the original story:

“We’ve had 325 people order the 6-pounder and no one’s ever finished it,” Denny Liegey said. “We’ve had people come from Germany, England and Australia to try it. They all left with doggie bags.”

I was assigned to accept the challenge. If I finished it, I’d be rewarded with the twin totems of American motivation: a free meal and a T-shirt.

They told me I did better than 75 percent of the previous contestants. And that’s about how much of the burger I finished. It nearly killed me.

Later outside on the patio, I was recovering sprawled on the concrete, mustard and relish dripping off my face and onto my shirt. My blue jeans unbuckled and descending below my butt cheek equator long before it was fashionable.

My photographer said it looked like a mob hit.

The true hit was the story itself. It was just a little item with two pictures on the very last page of America’s most notorious tabloid.

But, boy, did it have an impact. It was in the days before competitive eating really took hold, and when the Enquirer had the market on offbeat news practically all to itself.

The Enquirer was where every producer from every TV and radio show in the world went to find and book offbeat stories.

In fact, the restaurant has added stunt burgers up to 123 pounds for $399.99, popular for charity events, graduation parties, etc. (Note: all the big burgers require at least 24-hour notice; consult the website).

Of course, none of us is foolhardy enough to try any of the beef beasts solo. We’ll split it up, sort of like a dainty bunch of ladies.

Our frolic won’t be philosophical, philanthropic or artistic, but in one slim regard -- and this will be the only thing slim about whole excursion -- it will be educational.

Next time anyone asks any of us, “Hey, buddy, where’s the beef?” we’ll all know the answer.