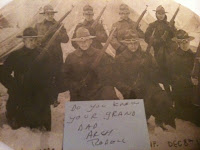 It’s one of maybe six pictures I have of the warrior-poet I hope to one day embrace in heaven.

I wonder if I have any left to lose.

Email ThisBlogThis!Share to TwitterShare to FacebookShare to Pinterest
Labels: Archibald W. Rodell, Black Jack Pershing, Bronz Fonz, Kodak, too many pictures, when pictures were something to cherish