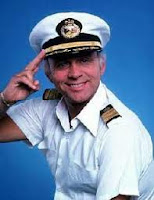 I mentioned yesterday how I didn’t want to write about the shipwrecked Costa Concordia for reasons of tasteless morbidity.

Well, that was 12 hours ago, more than 248 times the span acceptable to satisfy internet sensibilities regarding matters of taste.

This shipwreck demands our full attention.

Who is Capt. Francesco Schettino? Why didn’t he do more to help his stricken passengers? Hadn’t he ever seen “Titanic?”

Heck, hadn’t he ever seen “The Love Boat?”

Early indications are the ship crashed due to human error. Know what the human error was?

The captain steered the ship. That’s right. He wasn’t supposed to touch the controls.

The ship’s path was set by a computer and Schettino erred by seizing the big wheel and steering the $450 million vessel close to the island of Giglio, Italy, supposedly to impress on-shore residents.

What? The captain of a 4,200-passenger pleasure boat couldn't get laid on board?

And that part about the big wheel? That’s landlubber conjecture. I know there’s a big wheel like that at the local Long John Silver’s. They let me pretend I’m a pirate while the fry cook renders an alleged piece of former fish into something resembling a beach sandal.

If Schettino got in trouble for steering the ship, I wonder what they teach in boat captain school these days.

I’m sensing it’s purely social, like which fork to use and how to tango without stepping on an old widow’s arthritic toes.

The transcripts of the discussion between Schettino and coast guard officer Gregorio Maria De Falco are as gripping as any I’ve ever witnessed.

De Falco, distraught, says to the clueless Schettino, “Go up on the bow -- now! You need to get back on your boat and tell me if there are women and children and what kind of help they need . . . Is that clear? Look, Schettino, you may have saved yourself from the sea, but I will make you look very bad. I will make you pay for this. Dammit!”

Schettino says something like, gee, it’s dark and the water’s cold, causing De Falco to ignite in furious mockery.

“And what do you want? To go back home, Schettino? It’s dark and you want to go home? Get on the bow of the ship and tell me what can be done. Now!”

This De Falco is a great man. He shouldn’t be patrolling coastal Italy for drug runners and drunk fisherman. He should be solving the European debt crisis.

At one point, Schettino says the tilting of the ship “catapulted” him into the water. Now he’s saying he tripped and fell into the lifeboat, a line straying husbands will do well to remember if their angry wives ever catch them in bed with another woman.

One of the stealth facts of the story that’s heretofore escaped my knowledge was just how big these cruise ships have become. There are 300 of them operating around the world and one of them, the Allure of the Seas, has a capacity nearly three times the Titanic’s 2,228 passengers and crew.

Scientists are blaming global warming for the rise of the oceans. Has anyone thought what would happen if all at once, these water-displacing pleasure behemoths were removed from the seas?

The shorelines might instantly revert to what they were when the Mayflower landed at Plymouth Rock.

For not going down with his ship, Schettino is sure to go down in history with Capt. Joseph Hazelwood, drunken skipper of the ill-fated Exxon Valdez.

He is a scoundrel, deserving of condemnation and criminal prosecution.

I’m curious as to from where the sea-faring tradition of going down with the ship stems.

I imagine it has something to do with the captain and the ship being inseparable, but I’ll bet the romantic code’s cost us a lot of good men.

I confess when news of Schettino’s conduct emerged my simple mind went immediately to Capt. Merrill Stubing and “The Love Boat.”

To me, Stubing was the perfect skipper. He was firm, kind and never did anything to put his ship or Charo in distress.

I don’t know whether he’d go down with the ship, but I dimly recall an episode where it hinted he was going to go down with the woman who played Marion Cunningham, Richie’s mom on “Happy Days.”

A pity Schettino wasn’t doing something along those lines below decks when he decided to hot dog it and captain his ship.