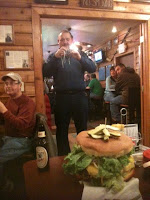 I was remiss Friday in my telling of our Saturday mission to consume the world’s biggest burger. I glossed over the key element that made it all possible.

I barely mentioned the designated driver.

I fancy with the proper education and motivation I could do anything. I could dash into burning buildings to save singed poodles, I could fly risky spacewalk satellite repair missions and learn to say with dramatic fury, “Scalpel!” in an emergency operating room.

But I’ll never be the designated driver.

Certainly, not like the one we had Saturday. Our driver, Don, is a sober saint.

So Saturday was the perfect mix of the sacred and the profane. He was sacred.

We were profane as all hell.

Here’s how this works: We have a friend who has a friend with a big van. We pay him $20 each to drive us to our chosen debauchery, in this case to Denny’s Beer Barrel Pub in Clearfield, Pa., home of the world’s biggest burger.

There were six of us. So that’s $120 for gas and we pay for his meals. It was two hours each way and we were at the tavern for three hours.

Let me explain. We met at the tavern at 10 a.m. and were offered shots of breakfast liquor. But not just any liquor.

Moonshine! Yes, someone had brought two giant jugs of homemade hootch and we all had a taste while we iced down two coolers of beer.

It was entirely unnecessary. Things like moonshine are meant to help loosen the tongue.

Our tongues were already so loose it’s surprising we didn’t scatter them up and down State Route 119. I remember laughing nearly non-stop from before Punxsutawney to clear past DuBois.

Through it all, Don never cracked a smile or made a single comment, devoting his full concentration to the wet and winding road. It was like we were floating along in some giant happy pod, the six most handsome and funny men on the planet and that feeling persisted throughout the day.

Luckily, we were in a place that nurtured such grand self-delusion -- incidentally only about an hour from the birthplace of Newt Gingrich.

Denny’s isn’t just home to the world’s largest burger. It’s also home to the world’s friendliest patrons and staff. I was thrilled when owner Denny Liegey made a big deal out of us being there and how he regaled my friends with stories about how pivotal my 2002 Enquirer story was to his global success.

This kind of friendly adulation is not uncommon with former story subjects of mine and it remains an enduring mystery to me why I can’t turn any of it into an even meager paycheck.

The pre-ordered burger was, of course, a revelation. My one buddy said I should have ordered the 15-pounder, but I wanted our guys to get a look at the original, the Ye Olde 96er, the six-pounder that started it all.

I was right. We had trouble finishing just the pickles.

It was the first time any meal I’d eaten became a tourist attraction. Strangers kept coming up to our table to take a picture of the burger and the six grown men who kept telling the funny stories that kept the whole room in stitches.

At least I think they were taking pictures of the burger.

And through it all, Don remained the steady stoic. When one of us asked if he needed a drink, he declined. He said he’d already had two.

He was never once judgmental or disparaging of our behavior. He simple drove us to and from our destination safely and without wisecracks or preachiness.

So here’s to Don and the other good-hearted designated drivers who facilitate all our fun. We raise a glass to those of you who, for the sake of our silliness, never do.

I don’t know how they do it. Being around six giggly guys like us would drive me to drink.

And I know if it did, Don would be there to see I made it home safe.