Dickin' 'round with Moby and other whales 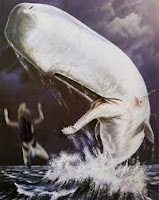 If people who revere the Grateful Dead are called Deadheads, what does that make those of us devoted to “Moby Dick”?

There’s a bunch of us gathering today through Sunday for a 25-hour marathon “Moby Dick” reading at the New Bedford (Mass.) Whaling Museum. Hundreds of volunteers will take 10-minute turns reading aloud without interruption one of America’s great novels.

I wish I could be there.

I’ve been Dickin’ around for the better part of a month now. It all started when I saw Nathaniel Philbrick’s book, “Why Read Moby-Dick.” The slim volume obviously led to re-acquainting myself with Ishmael, Queequeg, Starbuck, mad Captain Ahab and that great white whale.

It’d been 10 years since I’d last read the book by Herman Melville, a man who overcame one of history’s nerdiest names to achieve literary immortality.

I, in fact, bought my “Moby Dick” at that very museum. It was June 2002. I was in New Bedford to write a feature story for People Magazine.

What the story was about is unimportant. What is important is that I had five days in New Bedford to immerse myself in whaling history, culture and to become acquainted with some of the sites and customs key to Melville’s 1851 story.

Did you know that Moby Dick was based on a true story?

In 1819, the 238-ton ship Essex set sail from Nantucket on a routine whaling mission. Fifteen months later in the farthest reaches of the South Pacific, she was attacked and sunk by an enraged 80-ton sperm whale. The aforementioned Philbrick details the story in his compelling 2000 book, “In the Heart of the Sea: The Tragedy of the Whaleship Essex.”

The sailors who survived the sinking were doomed to three months adrift in whale boats and desperation cannibalism to survive.

Melville took facts about the ill-fated Essex and extrapolated them into what can be called without exaggeration a true whale of a tale.

And did you know why men risked their lives to go the most remote reaches of the godforsaken globe to hunt the largest animals on earth?

Now, it’s not what you think. And there was not even a bit of romance involved in getting the whales to part with their sperm or spermaceti, a substance that had nothing to do with whale reproduction. Not that it mattered.

No, these leviathans were slain and butchered aboard boats like the Essex to get at the vast oil-like spermaceti reservoirs that were used to light the world’s lamps and candles and provide unscented foundations for dozens of other of the day’s luxury goods.

For nearly 200 years whale spermaceit was considered among earth’s most precious resources. Fortunes rose and fell based on who was able to obtain it.

It would be in keeping with the trajectory of the whale’s ever-softening reputation.

It’s like they’ve all lost their balls, although anatomically speaking I’ve never seen balls or a penis on any picture or drawing of a whale, even the one famously named Dick.

Moby Dick may be the last popular whale to enjoy a masculine-sounding handle (Melville never explained the name’s construction).

Of course, what the hell do I know?

I’m just another Dickhead, one who’ll remain forever fascinated about the story of a whale named Dick who gave a one-legged captain an eternally hard time.