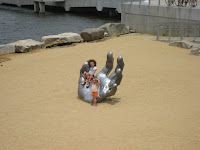 I was privileged to take part in a sacred ceremony last night. Matt told me he and his wife are having a baby. Their first.

I was the first person outside of his parents he’d told.

He’s a former student of mine and it’s fair to say I’m a sort of mentor to him. He tells me he’d like to be just like me.

And he’s not at all referring to frequent episodes of drunken revelry, ample hammock time and an apparent ability to skate through life with no visible means of support.

I have trouble wrapping my head around that ambition. He’d heard me for 13 weeks nearly two years ago profess what a failure I consider my career.

I’ve written for many prominent magazines -- once or twice. I wake up nearly every night troubled by my inability to earn money. The stack of rejection letters my most cherished book projects have drawn are now thicker than the books themselves.

I’m flattered he thinks I’m such a great writer because he, indeed, is a great writer. He’s already written many important stories for prestigious magazines.

To write like me, I tell him, you need to become seasoned by decades of failure.

I think what he admires most about me, and this is admirable, is I’ll never quit.

We get together for beers in Pittsburgh maybe once every six months or so to talk career. He gives me bona fide contacts to top magazines he’s sure will be interested in running my stories and I tell him about my latest career humiliation.

When I say what he told me is sacred, I mean that. It happens in a bar, not a church. It is consecrated not with sacramental wines, but with intoxicating spirits.

It’s not the kind of thing you tell your buddies right away. I don’t know any guys that run out in the street to scream their wives are having a baby -- not unless they want to get run over by a bus.

You don’t want to tell a common moron who’ll blurt out, “Man, is your life going to change!”

I heard that so often I reflexively began responding, “Well, that’s good, because up ‘til now it has really, really sucked!”

You want to tell someone who appears reassuring that fatherhood isn’t going to lay devastation to your happy young life.

I had to go clear to Florida to find my guy. I was there doing a story about the carnival industry.

He was a perfect stranger and one of the reasons I’ll always sit next to strangers in bars I’ve never been to.

He was a big guy, kind of quiet, but looked capable of making a lot of noise if things got rough.

We hardly said a word to one another for an hour. We just sat there sipping beer and watching the baseball game.

Then it became a guy’s version of speed dating: Where you from? What do you do? You golf? My grass needs cut. The bartenders are all cool here. Yeah, I hate the Red Sox, too.

He smiled sunshine when he mentioned he had two little girls. About an hour later we were new best friends and I said, you know, you’re the first guy I’ve told but I found out last week I’m going to be a dad.

It was like I blasted him with happy lightning.

He told me the moment I held my new child would be the happiest day of my life and every day would get better after that. He told me bedtime stories would become the highlight of my day. He told me nothing I achieved in my career would make me as happy as waking up every day knowing I am a father.

And he told me a lie.

He said he was a landscaper.

He was a prophet.

I said goodbye to Matt and said a parking lot prayer he achieves all his ambitions and becomes just like me.

A happy man who happens to write.