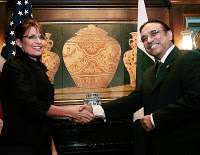 This one enjoyed a mini-surge this week. It charms me whenever readers revive some of these old stories. This was from March 2009. I re-read it and thought, you know, you don't hear foreign policy arguments like this on "Meet the Press." It's a pity. Read on and I think you'll agree.
This is bound to be controversial, but here goes: for the good of our national interests, Hillary Clinton needs a boob job.

And, yes, she needs to do this for Uncle Sam, and to be perfectly clear, I’m referring to the symbol of our shared national interests here and not the lecherous uncle who used to make you fish through his pockets for bent Tootsie Rolls.

This diplomatic overture occurred to me after I skimmed a recent story about how Sarah Palin’s voluptuous looks may have actually worked against her during the 2008 election -- and let’s again take a moment to revel in the marvelous reality show of a race that was.

It wasn’t too long ago that every national election involved four uniformly boring white men. The introduction of an unknown babe like Palin was a sensation that just keeps on giving. It’s impossible for her to say something that doesn’t enliven each and every news cycle when she manages to pry herself away from the tedium of North Pole politics.

We can all be grateful that she, her whack job family and pill-popping in-laws are going to be electrifying the national news for at least the next 30 years (and those of us who lean liberal can be grateful she’s a solid conservative).

Whether her dynamite looks cost her votes is disputable. But no one can argue the impact she had on the global politics when she made a memorable show biz visit to the United Nations.

To me, it was the highlight of the whole election. Palin handlers ushered her through a day of drive-by meetings with leaders from hotspots around the world.

It may have been the first time in history a push-up bra was deployed to demonstrate gravitas.

Typically, Fox only gave half the headline and left out ". . . for their harems!”

No reaction was more comical than that of Pakistani president Asif Ali Zardari, the still grieving widower of assassinated premier Benazir Bhutto. He used his face time with Palin to gush on camera, “You are so gorgeous! Now I know why the whole of America is crazy about you.”

When an aide suggested the two shake hands, Zardari beamed boyish sunshine and said, “If he’s insisting, I might hug!”

He did regain enough focus to talk some strategy.

“And how does one keep looking that good when one is that busy?” he asked.

Yes, love was in the air.

It occurred to me that Zardari and men like him are still living in the ‘60s. The 1360s. They’ve never had a chance to enjoy lusty relations or bawdy ambitions with someone like the comely Sarah. It’s a pity and I think the unnatural repression is a reason that many fundamentalists around the world become so kill crazy. They’re stuck home alone on weekends with their religious studies while everyone else is out getting some.

It sort of reminds me of the unfulfilled longings from my own adolescence, except my internal frustrations boiled to the surface in the form of, not homicidal mayhem, but sprawling fields of unsightly facial pimples.

Make no mistake: We are at war with fundamentalists who resent our way of life, our exuberant liberty and the fact that they can’t put women like Palin in a drab burqa and a stifling muzzle (in reflective moments, John McCain probably shares half that sentiment).

That’s why Hillary needs to get some massive new boobs, some low cut dresses and a bra that’ll shove those hooters right up under the noses of our fundamentalist enemies.

She needs to look them in the eye, dare them to maintain eye contact and say, “This is who we are. Like it or not, this is the future and there’s not a thing you can do about it. And maybe you should loosen up that turban and think about giving it a try, big boy.”

It would make Hillary an historic feminist icon around the Muslim world and might eventually lead to seismic changes in how Arab males treat women.

Now, if I could just find a powerful politician with enough international respect to articulate the wisdom behind this groundbreaking diplomatic initiative . . .

I wonder if Bill Clinton would think this is a good idea.
Posted by Chris Rodell at 9:36 AM