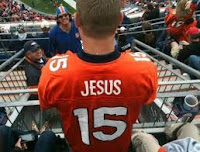 I was confused the first time I saw the Denver Bronco jerseys with the name Jesus above the no. 15.

I try and follow the NFL draft news, but was unaware Jesus Christ from, I guess, Nazareth State was eligible. I felt a flush of chagrin the Pittsburgh Steelers drafted an Ohio State defensive end over the King of Kings.

Jesus, I’m sure, has range, plays hurt and brings a host of intangibles like the ability to turn Gatorade into wine, which I think sideline sophisticates would appreciate.

Then I realized my mistake. The Broncos didn’t draft Jesus.

The jerseys were referring to Tim Tebow, a devout Christian and the most controversial player in a league rostered with wife beaters, drunk drivers, dog fighters and manslaughter convicts.

And what does a straight arrow milk-sipper like Tebow do that’s so controversial?

I hope he wins the Broncos straight into the playoffs.

I know what you’re thinking, “Holy reversals! Aren’t you the guy who just last year wrote you were hoping to see Satanic end zone celebrations to honor the Prince of Darkness?”

That’s true. I find overt Christian intrusions in sports annoying. I think devout running backs should thank offensive lineman because they, not Jesus, open holes in the Red Zone.

But I see a key difference with Tebow in contrast to other Christ-honoring NFL stars.

He is the worst quarterback in the game. Maybe one of the worst ever.

He fails at one of the key quarterback requirements teams need to win games.

In order to make a catch, receivers usually need the oddly-shaped ball to approach them in a tight spiral. Tebow’s passes spin wildly out of control like aerobatic planes moments before air show tragedies.

Then there’s this. The ball needs to be thrown in the vicinity of where the receiver is. And until they change the rules so a player can catch a ball on a bounce, it can’t be 10 feet short of the intended target.

Tebow’s coaches are beginning to understand these weaknesses and game plan so their quarterback will have to do as little quarterbacking as possible.

For instance, in Monday’s game Green Bay Packer quarterback Aaron Rogers, right now the game’s best, completed 25 of 32 passes in a 45-7 stomping of the Minnesota Vikings. Thirty attempts per game is about average.

And what drives the NFL analysts nuts is, good gracious, he won again. The Broncos beat the Kansas City Chiefs 17-10.

Tebow winning infuriates the sports military-industrial complex of commentators at ESPN who are on a mission to exalt the NFL as the realm of god-like immortals.

They don’t know what to make of a man who doesn’t pretend to be anything other than a mortal who likes God.

The fundamentalist Christian in America has few foes more fierce than I. I hate their politics, their bigotries and the divisive pain they inflict on families. These are Tebow’s biggest fans.

He defies their sacred charts that say a QB has to be upright in the pocket, look off multiple receivers and deliver the throws with righteous Old Testament authority.

And with every victory, they become more exasperated.

He’s one of those rare guys who seems strengthened by crucifixion.

I root for guys like that, even when some of their biggest fans act like obnoxious jerks.