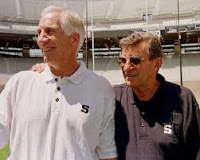 Joe Paterno has retired. His 46-year tenure at Penn State ends Saturday. Good. It’s time for him to go.

I say to Tallahassee.

Sports writers who called students getting freebie tattoos in exchange for memorabilia at Ohio State a “scandal,” have been rifling through their thesauruses to describe what’s happened at Penn State since at least 1995.

Horrific is certainly in the ballpark. I haven’t heard Satanic used, but it fits, too.

The oddsmaker in me speculates that number is going to skyrocket. I don’t think someone like him with appetites and access like that is going to seek to satisfy them just once every two years.

The Catholic analogy is apt in many ways. If the charges are true, then Sandusky’s wickedness equals that of pedophile priests and the moral failings of the men who for almost 12 years were in position to put a stop to it criminal.

And now I wonder how rampant predators are in youth sports. Are we going to see a wave of accusations that has all shaking our heads and saying, man, how come we didn’t see this coming?

The reaction of former Penn State players, many of them truly great men, is poignant, their sense of betrayal heartrending. Being a Nittany Lion is core to their identity and now they must feel a shameful sort complicity.

Man, how come we didn’t see this coming?

The reaction of sports talk yakkers is more interesting. I believe if you left Sandusky to the hands of guys like Mike Golic -- and I like Golic -- he would participate in a Biblical stoning.

It’s very difficult for professional football broadcasters to even discuss. They’ve created a culture so overdosed on testosterone they find it impossible to accept anyone involved in this most manly of games could ever be guilty of such deviant evil.

Understand, these men have played professional football and in the entire history of the NFL not one single homosexual has ever played the game. Not one!

Our collective football idolatry is partly to blame. We treat the players, the coaches and anyone associated with big, winning programs like gods.

So what are we to do with god himself? What do we do with Joe Paterno?

I heard one sports talk host speculate Paterno has more power at Penn State than the university president.

He is beloved. Like any big college program soaked with money, there have been missteps, but I’m convinced he’s always had the best interest of his students and his university at heart.

But how he and trusted others could do little more than issue a clerical sort of inter- office memo when everyone involved should have run to the police is reprehensible.

So his last game at Penn State is Saturday.

His failings in this regard are monumental, but I believe he is deserving of a shot at redemption.

I’d like to see him coach elsewhere and become a collegiate crusader desperate to address all that’s wrong with a game many love.

And I’d like to see it happen in Tallahassee, home of the Florida State Gators, formerly coached by Paterno nemesis Bobby Bowden.

It would be a spectacle worth watching and Paterno might help save a game that festers with corruption and deceit.

So let’s send JoePa to Tallahassee.

Let’s send him to hell.