Best Damn Band in the Land 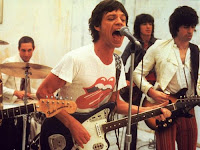 I’ve always fancied I’d flourish as part of a really successful band. I love music and am pretty sure I’d enjoy groupies.

And less superficially, I think I’d thrive being part of a band dynamic.

Of course, this is the wildest kind of conjecture.

First, I’m incapable of playing even a lick of music on any traditional instrument that doesn’t involve lifting my shirt to play an armpit concerto of “Yankee Doodle Dandy.

As a heroic crime fighter I’d treasure having SuperVision. But as an ordinary schlep assigned to cover things like the Unity Township Municipal Authority, the idea of any supervision drove me nuts.

It’s not like I’m exactly setting the world on fire working all by myself, either. But working for yourself brings its own sort of collegial dysfunctions. The voices I’m always hearing in my head never let me get any wage-earning work done.

This one tells me it’s time to write another blog. Then one chirps up I should really groom my ear hairs. Then I hear a persuasive chorus in the corner that says, screw all that, let’s all go grab a beer!

The voices in my head may indicate psychopathic tendencies, but there’s not a tyrant in the group. Majority rules so, hi-ho, it’s off to drink we go.

Being a regular in a friendly tavern is as close to being in band as I’ve ever come.

People show up when they feel like it, motivation to do anything productive is evasive and many of the “band” members would benefit from two months of intensive rehab.

I’ve been dreaming about being in a real band for a week now since I saw a band that kicks the asses of even the Rolling Stones. And not just cause they outnumber them 22-to-1.

It’s the Ohio University Marching 110, The Best Damn Band in the Land.

Lo and behold, the Pittsburgh Steelers brought them in for half-time entertainment last week for the home game against the New England Patriots. They did a pre-game concert in the parking lot with the Pittsburgh skyline in the background and it was one of the most euphoric music performances I’ve ever seen.

And I caught the whole thing on video. You can check it out here.

If you love great marching band music, you must give it a quick looksee (at least the last two minutes). They dance. They boogie. The horns’ll blast the hairs off your head.

It’s also fun for anyone with anthropological interests to watch, too, because you can see how much my hand shakes when I’m buzzed.

Understand, I was filming with my less dominant left hand. I was holding my Duquesne Beer bottle in my right hand so as not to jostle the carbonation.

I learned at least something at Ohio U.

Man, was I having fun. Me and about 10 buddies had spent the night at the North Shore Marriott. Then to hear the band of my alma mater, once again the reigning the No. 1 party school in America, play made it the highlight of the weekend.

We went up and gushed to a bunch of the band members after the performance.

I spent the rest of the day imagining the fun they were having on the bus back to Athens. They’d played a fantastic show at a great venue and they did it so spectacularly I guarantee there were a bunch of high school kids in attendance who said to their folks, “Man, I want to go to Ohio University!”

Well, me, too. And this time I’m not going to spend my years there getting drunk and chasing credentials for a go-nowhere career. This time I’m going to do something impressive.

I’m going to do whatever it takes to join the Best Band in the Land.

I wonder if they’ll let me audition my armpit.