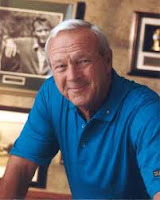 I find myself seeking odd reasons to run to the post office to spend money, as if my meager purchase of $8.80 worth of Homer Simpson stamps is going to save the 236-year-old institution that is hemorrhaging $10 billion a year.

That’s how on August 19 I found myself in the Latrobe, Pennsylvania, post office filling out forms and paying big postal bucks to send a 2-pound, 5-ounce, pile of Arnold Palmer Kingdom golf magazines and a book to Brazil.

It’s probably been 10 years since anyone over the age of 10 raced to the mailbox for anything.

My postal heyday was about 15 years ago. I was working for an array of publications and every day would bring fresh reason to rush to the post office in hopes of finding treasure. Paychecks? Magazines featuring my work? Reader letters?

Our PO Box was a five-minute walk from our home. I’d make that stroll everyday at precisely 10:15 a.m. Nothing -- neither rain, nor sleet, etc. -- could keep me away.

It is the same post office where the great Palmer himself receives his mail. Palmer, 82, still gets about 20 to 30 autograph requests each and every day. He personalizes and autographs pictures and even pays the postage to return the keepsakes to every corner of the globe.

I wonder: if Palmer had been a typical jerk athlete, would the USPS have gone belly up in 1999? The man’s been a swingin’ postal stimulus package.

I grew up knowing a string of friendly and fit postmen. They’d spring up the steps and offer the mail and an always hearty greeting.

They were so pleasant and cheerful I was shocked to find in the early 1990s that a surprising number of postal employees harbored a homicidal bent and “going postal” became shorthand for work place rage.

Then the inept mailman as stereotype came along with Cliff Claven from “Cheers,” and Newman from “Seinfeld.”

Even those indelible boobs couldn’t diminish my postal affections, especially after I realized the USPS could be an unwitting foil in lucrative pranks.

I was in Florida for a winter frolic in 1994 and, as always, picked up a handful of postcards to taunt my snow-bound friends. To my sweetheart, I mailed one with an idyllic picture of a sunset over the Everglades. She got it in three days.

To my buddies, I sent ones like the alligator nipping at the babe’s bikini bottom. Those took 7 to 10 days and most arrived with little pin holes in the pictures.

Clearly, under-sexed postal employees were lifting the sexy postcards from the flow and posting them for daily ogling.

So I turned in a lead to National Enquirer about how sexy postcards take longer to get delivered than scenic ones. They paid me $1,000 to conduct the research, which involved mailing two postcards -- one sexy, one scenic -- to 20 buddies around the country.

On average, the sexy ones took seven days longer to be delivered.

Thus inspired, I began thinking of other ways the USPS could work for me, a tabloid reporter eager to tweak institutional authority.

I was assigned a story that eventually ran under the headline: “The Post Office REALLY Delivers!” It involved stamping and addressing unusual items to see if the post office would treat it with the same efficiency as a business letter.

Of course, it did. It’s always been very professional, even when confronted with mailing things like coconuts, rubber snakes and big bags of goo.

Understand, those items were not in boxes. We addressed and stamped the actual items. I still fondly recall the non-plussed look on the businesslike post mistress’s face when I handed her a set of false teeth with my grandfather’s DuBois, Pa., address on them.

Money, medicine, legal documents and illicit love letters -- you could always count on the post office.

That’s why I spent a good part of the late summer stewing.

It all started when straight out of the blue I got a call from a blog reader from Brazil. His name’s Bob McCarthy, an ex-pat American.

The fact I have a regular reader in Brazil delights me. The fact that he called to announce his existence delights me even more. We had a great friendly chat.

Turns out Bob’s a golfer and a big Arnold Palmer fan. So I decided to do a good deed.

I do more of these than I let on. I help old ladies cross busy streets, retrieve cats from trees and advise Republican presidential candidates on how best to dispense with unseemly news firestorms.

But for Bob I decided to send him some copies of the posh Palmer magazine, Kingdom, for whom I write, and a copy of my 2004 golf ace book.

I filled out all the forms, swore in writing the package didn’t contain anthrax or stink bugs and pushed it across the counter. The lady asked if I wanted insurance.

So I rolled the dice and said nope. She said it would take about 12 days to get to Brazil.

Well, two weeks passed and I didn’t hear from Bob. Then a month. Then two months.

And it gnawed at me. Was it stolen? Did it get destroyed? Could Bob be as rude as the writers of blogs he enjoys?

None of the above.

Bob called about a week ago to thank me.

“Yeah, the Brazilian postal workers are in a labor dispute and they always go on a big slowdown before they strike.”

So I’d like to salute the USPS and all their foreign brethren. You helped me make Bob’s day for just $21.39, a intercontinental bargain.

Despite its funding woes that seem destined to doom it, the USPS came through for me again.

I couldn’t be any happier than if I’d raced to the mailbox and reached inside to find somebody’d mailed me a great big bag of goo.