What to say to serial sneezers 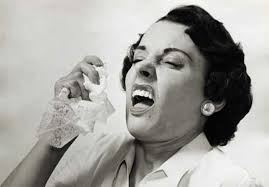 It was 978 days of sneezing. Consecutive days. Twice a minute. Every minute. She even sneezed in her sleep. Guinness calculated she sneezed more than 1 million times the first year alone. She didn’t stop until Sept. 16, 1983.

Oh, to have had stock in Kleenex back then!

It must have been terrible. For her, sure. But what about her family?

I sneezed eight consecutive times the other night and the kids reacted like I’d been stricken with viral leprosy.

They were really annoyed.

And I understood. I can annoy the hell out of my family when I’m sitting quietly alone in an entirely different room on another floor. I’m probably annoying one of them right now and we’re all miles apart.

Our family makes a big deal out of sneezing.

It never used to be that way. Someone would sneeze and we’d mumble, “God bless you,” like The Almighty was going to rush right into the kitchen with a fresh tissue.

It sounds righteous, but we’d say, “Pass the salt,” with more soulful urgency.

Then I migrated a startling sneeze custom from the days when my office was above The Pond and I’d make silly with Dave for an hour or two each day.

And, boy, do I miss that pastime.

It started with Dave’s acknowledgement of how annoying it is to be in room with a serial sneezer.

I remember the first time it happened. A sweet, elderly lady chirped a dainty little sneeze into her hanky. Dave, ever the gent, said, “God bless you,” like he really meant it.

On the fourth sneeze, he said aloud what everyone in the bar was thinking: “Now, you’re just being annoying.”

The stranger was not yet attuned to Dave’s sense of humor and took offense. She grabbed her purse and stormed out the door in a huff, if it’s at all possible to simultaneously sneeze and huff.

We spent the next hour or so wondering if he should have handled the situation differently or it was good riddance to just another crank who threatened to damage fragile bar karma.

Dave had been phony gallant then honestly rude (Dave’s very well-rounded that way). You can’t keep saying “God bless you,” over and over. It calls embarrassing attention to the sneezer and God has, we hope, better things to do.

But saying nothing is impolite, too. We needed to find a balance between acknowledging and ignoring.

We decided on the groundbreaking sneeze count.

It became very popular. It, of course, startled the hell out of the uninformed sneezers.

But then people started getting into it. It became sporting. It also had a positive impact on spousal relations.
I’ll never forget the time I broke the bar record when I blasted 12 sneezes in about 90 seconds. When Val asked how my day had gone I told her all about it. She was so happy.

Later, it occurred to me she may have been speaking sarcastically. So I was relieved that years earlier I’d made the deliberate decision to always confuse sarcasm with compliments.

I thought about the old sneeze count when I read about Donna Griffiths and her 45-month long sneezing fit.

What do you say to a loved one that’s stuck in a years-long sneezing fit so epic it confounds all the doctors and draws international attention?

I have a feeling I know what my family would say.

“Been nice knowing you!”