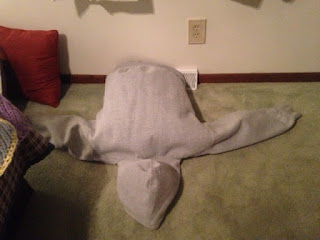 This weekend I’m feeling like the hysterical woman in the 1961 “Midnight Sun” episode of “The Twilight Zone.” The classic stars Lois Nettleton as a distraught New Yorker imprisoned in her apartment as the mercury soars.

Earth is edging closer to the sun and we’re all about to be incinerated.

But the show has a happy ending, albeit “happy” is relative in a Rod Serling way.

It was all a dream!

The earth is not moving closer to the sun.

It is instead moving further away and we’re all destined to in days turn into human popsicles. The doomed woman revives enough to — ahh! — smile at her frigid fate. Sure beats the heat!

It’s cool to be cold.

Understand, it’s only cool as long as I’m insulated from it.

The forecast high for the next three days is 19. That’s 72 hours of the kind of bitterness that would have had the hardy men (and token pregnant Indian woman) of the Lewis & Clark expedition looking for a Motel 6.

I’ll only be out doors for a total of about 45 minutes this weekend — 44 if parking spaces nearest the bar door are available. Bar time is an essential remedy to those of us prone to cabin fever.

Ensconced in our home right near the warm hearth, I’ll stir the fire, watch TV, read and smell the simmering soups.

A typical spring/summer/fall weekend involves yard work, house maintenance, garden weeding, mulch spreading, hyper recreation, etc. Oh, and it all involves lots of things that sting. It’s all in the pursuit of happiness, as misleading a phrase as there’s ever been.

Pursuit’s unnecessary. Find a comfy enough chair and happiness will find you.

I can list three reasons for my growing affinity for winter. One is brevity. This is a nasty stretch, but it’s only three days. It’ll be 50 again by Wednesday and in winter 50 is the new 70.

Two is ingenuity. I enjoy finding ways to outsmart winter, as I’ve done in the above picture. It’s my pullover hoodie splayed out in front of the furnace register. It infuses every fiber of the garment with a warmth that armors the body for the cold to come.

Happily, the girls have inherited the wisdom of this trick and on days like this parts of the house resemble the warehouses where they ready the big floats for the Macy’s parade. Sadly, this will likely be the only thing the girls will inherit from me.

I’m talking about attending the Steelers playoff game Sunday. Windchill temperature at 1 p.m. kickoff is forecast to be minus-4.

It was the 2004 AFC Championship game versus the New England Patriots. Kickoff was 6 p.m. The high that day was 11 degrees. It was the second coldest game in Steeler history and maybe the coldest I’ve ever been in my life.

I’m a bitter-ender so I stayed till the final whistle, praying the whole time my car would start. We lost 41-27. I remember thinking, “Well, it was a tough loss, but hats off to New England. They won fair and square.”

So on Sunday I’ll be cheering the Steelers from my recliner and hoping both teams play a fair game.

Because that’s the way of the six-time Super Bowl Champion Pittsburgh Steelers.

And when the game is over, I’ll drop another log onto the fire, enjoy a hot meal and await the girls’ decision as to that evening’s filmed entertainment.