The ups & downs of speedy elevators 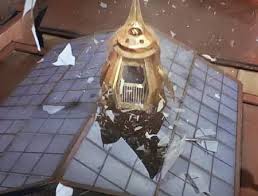 Although my aim is to always at least appear to be a self-sufficient Tin Lizzy tenant, I’m thinking of asking Buck if he’ll install a three-story stair lift to ease my ass up the flights to my office.

That would save me 57 steps a trip or about 342 steps a day. That’s all vertical and on some days my knees are starting to bark.

I’m thinking of doing so on the grounds it would save me vital energy so I can spend the next three hours just sitting on my ass and staring out the window.

Installing a stair lift would be a sort of compromise, too. I first thought of asking him to install an elevator that accelerates to 45.8 mph.

That’s the new world elevator speed record set in Shanghai. For perspective, it would take an elevator that fast precisely one hour to go from the bottom to the top of a building that is 45.8 miles tall.

Elevators in the new 1 World Trade Center creep along at a mere 23 mph, so we have to hope Trump will do everything in his power to keep elevator racing from becoming an Olympic sport.

A Washington Post story says a boom in super-skyscraper construction means by 2020 40 percent of high-speed elevators will be operating in China.

The pragmatist in me hopes the nation experiences a boom in massive elevator brake construction by at least 2019.

I could see a mechanical failure on one of those race rocket elevators causing it to shoot straight through the roof the way the Wonkavator does in “Charlie and the Chocolate Factory.”

I’ve always wondered about the reverse, too. If a cable snaps could you survive by jumping up a second before impact?

Experience tells me the quickest way to ensure an elevator death is to get between two children who are racing to see who can push the floor button first. It’s like they think if they successfully navigate the automatic lift to Floor 5 at Nana’s apartment they’ll be accorded the same acclaim Admiral Byrd received when he planted the first flag at the North Pole.

I remember reading a health study that says elevator buttons are among the germiest surfaces we encounter and it’s recommended we use our noses.

Have you ever been alone in an elevator and pushed every floor just to mess with the next group of Type-A passengers? For something so juvenile, it still feels fun.

Muddy Waters, the great bluesman, sang a song called, “Elevate Me Mama” that, I think, has nothing to do with raising his body up a floor or two.

Well, maybe part of his body.

Well you know when you start to elevate me
You almost scared me to death
You elevate me so fast
I have to stop and catch my breath
Elevate me Mama!

I’ve never had sex in an elevator, but I’ve been in some elevators crowded enough to have left me feeling like I have. It’s why I pause before entering any elevator and scan the passengers to position myself right behind someone who appears jolly.

It just doesn’t seem to lend itself to my kind of sex — and by that I mean sex with just me and the missus in the room.

I might change my mind if I’m ever in an elevator that’s conducive to offbeat romance.

My love elevator would need scented candles, a couch/cot or love seat, a big screen TV, a shower, a balcony over-looking the ocean and probably the elevator equivalent of room service.

And my Val would have to be on board, too.

The woman really knows how to press my buttons.

It’s ironic, but in some ways the stair lift would help keep me more grounded.

Thanks for sharing, it was interesting to read!