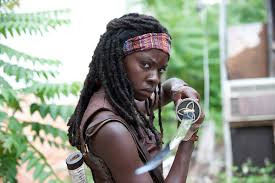 
(Note, Jan. 23, 2017: Let me cut to the chase; because I did so badly on the new video, I'm going to submit this one until I can do another one like it, only snazzier. Thanks for reading!)

After previewing my most recent promotional video, I’ve made a directorial decision regarding the next one.

I’ve decided to cast someone else to play me.

The “new” Chris Rodell will be younger, have better posture and smile more vibrantly.

And she’ll be black.

Having the woman who plays Michonne on “Walking Dead” play me will really ring the old diversity bell, and she’s a terrific actress. She could use her katana to in mid-air sever a whole damn box of crayons.

The people who are trying to secure me more big league keynote addresses suggested a 90-second promotional video would be helpful.

Luckily, I have an ace videographer who’s now twice graced me with his talents.
His video news segments have won Mid-Atlantic regional Emmys. He could be busy round-the clock fulfilling lucrative corporate work.

Why people like him choose to squander precious time working on my behalf for just a few free beers, I do not know.

Maybe they don’t realize Straub American lager is sold in most every area beer distributor.

I rehearsed for about two whole days trying to ensure it looked totally unrehearsed.

Filming a commercial about yourself and starring in it feels like an exercise in pure vanity, like a really extended selfie. I was conscious of this the whole time.

So I’ll be interested to hear the reactions. Here’s the link.

I’ve long said anyone who believes he is his own worst critic is either delusional or single.

Is that the case here?

I like everything about the video except the parts in which I’m speaking, which is unfortunate because the whole point of the thing is to get people to hire me to speak.

I love the music, the asides and shots of me playing around in the office.

It looks wonderful and I remain optimistic its message will work with its intended audience: meeting planners looking for speakers. I hope it conveys the mirth I feel about life even in tumultuous times.

I don’t think it’ll stand out the way I’d hoped, but it’s another foundational block in the now-sturdy structure that is my pitch.

And the next one will be even better because it’ll star Danai Gurira, assuming she’s willing to do it for a few free Straubs. I think she’ll go for it.

Something about her tells me she’s a real sweetheart.

I now have a video for nearly every occasion. Here are some of the others:

• “So what did you think of Chris (in 20 seconds or less)?” — I had a lot of fun with this one. Funny cameos include my mom, wife, kids, Arnold Palmer and Bill Clinton.

• Greensburg Library ’14 — This is when I was just getting started and shows, I think, a really strong and conversational talk. There were only about 15 people here, but you can tell everyone’s having a good time.

• Bethel Park Speakers Series — As a commentator points out, this one appears disjointed because they failed to mic the audience. So it’s like an hour of me telling stories and basking in the laughter no one else can hear.

• “What the book’s about and why it’ll always be free” — Very nice. This is the first one my buddy Brian did for me. Has a nice polish to it. I used this as the main feature on my crayons page for several years.

• “Why ‘Use All The Crayons!’ is like the cure for polio” — It’s too bad the lighting renders this nearly unwatchable because it’s great reaction to a strong delivery. This was before the Pennsylvania Restaurant & Lodging Association. It’s when the guy told me I’d cured his hangover.

• “‘Crayons!’ FAQ” — Hilarious. I had Dave from The Pond pose a bunch of questions about the book. Very cheesy.

• Quinn Fallon sings about me — What’s not to love about this? My rock star buddy sings the songs I inspired.

• Omaha intro — This highlights the humor I use to start my talks.

• “When men tell other men, ‘I love you’” — Depending on the audience, I sometimes read a story from the book. Nothing boring.

• “Greatest ovation ever” — That’s no lie. This one is pure fun. I send this link out with every pitch. This is my most-viewed video with nearly 1,800 hits. The recollection of the moment still leaves me tingling.