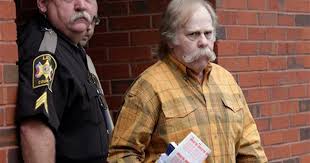 Twitter tonight will be aflame with poisonous taunts, incendiary rhetoric and the kind of bullying hate-speech we scold our grade schoolers for using.

And for a few fleeting hours, the source of the ALL CAPS bile will be someone other than our president elect.

Tonight is the BCS college football national championship game between Alabama and Clemson and Harvey Updyke will be alert at his keyboard.

When anyone asks me about the last thing I’ve read, I don’t respond with references to classical literature or some trendy bestseller. No, my answer is always, “The last thing I read were the malignant tweets of Harvey Updyke.”

If he’s not the no. 1 fan of the Crimson Tide, then he’s at least its most visible fan, a word that derives from fanatic. Neither word does Updyke justice.

Proponents of radical Islam are less fanatical than Updyke, 66.

The silver-tongued devil somehow persuaded another wife — he’s had three of them — to name a daughter Crimson Tyde, thus opening the innocent up to a lifetime of menstrual cycle jokes.

He has a dog named Nick named after Alabama coach Nick Saban.

Saban is on track to be one of the best coaches in history. Part of what motivates him, I think, is one day he’ll realize he’s made a tactical error and he’ll become fearful Updyke is going to kill Nick.

And it’ll be a coin toss whether the homicide will involve the dog or the coach.

Updyke came to infamy in 2013 after hated rival Auburn beat Alabama leading Updyke to drive to the Auburn campus with a trunk filled with industrial poison and murder on his mind.

He injected the powerful poison into the 130-year-old oak trees that towered over Toomer’s Corner, a sentimental campus spot where students gather to celebrate victories, propose marriage and recollect lifetime memories. The commercial herbicide dosage was so potent authorities were unsure if the groundwater would ever be safe again.

What did he do next?

He said he was justified because years before Auburn fans had celebrated the death of Coach Bryant by decorating the Toomer’s Corner oaks.

That the story wasn’t at all true did not dissuade him.

Score another victory for fake news.

He spent six months in jail and the former Texas state trooper was ordered to pay $796,731 in restitution. Of that, he’s paid $99.

I was initially intrigued to read on his release from jail he seemed remorseful. He said, “I wish now I had not killed those trees …”

Then I read the rest of the sentence.

He said on twitter this year he was going to a Halloween party dressed in a dead tree costume.

I can’t in all of literature think of a more compelling villain.

Voldemort was more cerebral, Col. Kurtz had a constructive side and say what you want about Capt. Ahab but at least he liked to fish.

Updyke is nothing but mean and menace. Not a game goes by when Updyke doesn’t tweet a death threat to poison — and his executions always involve poison — a player or coach who upsets him.

What surprises me most is how much he admired Hillary Clinton.

He must never have taken a Saturday afternoon off to watch “Kramer vs. Kramer.”

So if you’re going to watch the game, I’d advise you to for entertainment purposes keep one eye on the action and one eye on @Harveyrolltide.

I first wrote about Updyke in ’14 and reprise the paraphrased ending here because my feelings haven’t changed.

Will I root for Clemson or Alabama tonight?