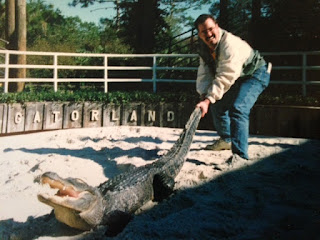 The way you hear our president talking about the “dishonest media” you’d think he’d want us fed to the alligators, heaved from airplanes, shackled, made to lay on beds of nails and smashed with sledgehammers.

In my case, it’d all be redundant.

Of course, I’m no longer part of the actual media. I’m some kind of oddball hybrid. I write, but mostly it’s for myself, so it’s like a presumptuous sort of hobby.

But all but one of those adventures befell me during the 10 swashbuckling years I wrote for National Enquirer, back before it become so political.

I was reminded of them the other night when I had drinks with a former student of mine.

You didn’t know? Yes, I from 2006-2010 taught creative non-fiction at Point Park University. They canned me when they realized — experience be damned — I was less credentialed than the grad students I was teaching.

It’s a pity. Many told me I was an outstanding professor and I enjoyed the opportunity.

Many of them have gone onto stellar careers in journalism, not an easy feat in these tumultuous days of shifting media outlets. Many are working at newspapers, some at magazines, some at feisty startups.

I’m proud of the guy who told me he’d recently been tased!

We met for drinks last week. He’s a truly great writer/reporter and the recipient of the only “A” I ever bestowed.

He just scored a book contract about how tasers are affecting law enforcement and as part of his research agreed to be a victim.

His tale had me recollecting all the foolhardy experiences I endured for the sake of a story. To say I did it to earn a buck (usually $1,000 of ‘em) would be untrue. I did it all because I knew I’d one day want to be the kind of person I was destined to become.

I guess the first true stunt story I did was skydiving for the Nashville Banner. I remember the jump master being this big mean dude, a U.S. Ranger who’d served two tours in Vietnam.

It’s scary being in a perfectly good airplane cruising at 3,000 feet when they open the door and tell you to step outside and stand on the strut. But disobeying Sgt. Slaughter after a day of drills was scarier.

When he said jump …

It’s shouting loud being in a plane when the door’s open. But it becomes instantly and completely quiet when your static-line chute deploys.

As for the pain, they’d cinched the ball harness super tight, assuring me it was all procedural. I imagine they were cackling about it because for the entire two-minute descent I sky danced kicking my legs right and left trying in vain to find an illusive comfort sweet spot.

It hurt so bad I didn’t get to enjoy the jump.

So went a second time. And it was spectacular.

Would I go again?

Probably. I did the Skyjump in Vegas in ’13 and it was a similar thrill.

What I won’t do again — ever — is lay on a bed of nails and have an Ohio mystic put 50 pounds of concrete on my chest and smash it with a sledgehammer.

That was an Enquirer stunt story supposed to demonstrate the power of the mind over pain. The mystic was Komar the Great. He in 1997 was in the Guinness book of records for various feats of strength including longest barefoot fire walk, ascending knife-edge ladders and having 825 pounds placed on his chest while laying on a bed of nails.

His real name was Vernon Craig. He was a Wilmot, Ohio, cheesemaker and for a guy renown for hot feet, he was pretty cool.

I once had my leg broken in three places on a high school hockey breakaway. That hurt.

But nothing in my life hurt like the bed of nails. Now, the point of the story was to demonstrate the power of the mind over pain. So I’m either really smart or really stupid because it hurt like hell.

I remember praying the photographer wouldn’t screw up and demand an encore.

The story became the only Enquirer feature I did that was totally false. The headline: “I lay on a bed of nails and took a sledgehammer blow — but I felt no pain!”

I later complained to the editor about the lie.

“Well,” he said, “it wouldn’t be news if we wrote, ‘Enquirer reporter lays on bed nails — and feels incredible pain!’”

So in their eyes it was a victimless crime.

The alligator wrestling is a fun one to knock off the bucket list. I had a keen interest in gators ever since the Miami Herald ran my story about a blind Everglades gator wrestler.

So my buddy George and I were one day day-tripping across central Florida when we saw signs for Gatorland. We pulled in and I asked the office if I could do a story about the attraction that had been around since ’49.

Well, they couldn’t have been more accommodating. A mirthful guide took George and I on a behind-the-scenes tour, even taking us on a field stroll amidst all the big monsters, some as big as 12-feet. It was exhilarating although I never felt we were in danger.

The gators had no menace and behaved like they were sedated, which was only fair because I’m sure George and I were.

The picture above is from later in the day when they put me on an island pen in front of a group of spectators and let me “wrestle” a feisty 7-footer. I snagged it by the tail and struggled to keep it from dragging me into the moat. They’re very strong.

The match didn’t last long and critics will point out it wasn’t true wrestling, but for story purposes I was in a pen with a real gator and only one of made it back to the parking lot.

I’ve worn kilts through construction zones, been shackled to my wife for 72 hours to test our love, and once gained 20-pounds in one week eating just like Elvis.

It’s been a lot of fun. The best part wasn’t so much what I did, but with whom I did it. Writing stories has led me into the lives of a carnival of characters and that includes all the ones who were characters in carnivals.

That’s what I’d tell journalism students if I was ever asked to advise those interested in the art of storytelling.

Being part of what is being derided as the “dishonest media” is both fun and noble.

It sure was for me.

In odd we trust