The many ways in which I'm like Henry David Thoreau 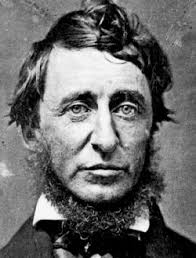 I don’t know why it didn’t occur to me earlier, but the writer with whom I have the most in common is none other than Henry David Thoreau.

He began writing “Walden” while spending two years living in the woods on Walden Pond near Concord, Massachusetts.

I wrote “Use All The Crayons!” while spending eight years drinking at The Pond near Latrobe, Pennsylvania!

I was an Ohio University C student who wrote: “I wonder if temperature in heaven is individualized or if some old ladies complain it's always too cold & bundle up in sweaters.”

He believed in the abolition of racial injustice and once wrote: “The only house in a Slave state in which a free man can abide with honor is a government prison.”

Reading “Walden” in college was a foundational experience for me back when I was seeking a life-guiding ethos. He talked about shedding our petty contrivances in favor of spiritual elevation. A Thoreau-guided life promised transcendence, simplicity and soulful peace untainted by crass materialism.

It promised all the things an idealistic young man craves save two, all but two.

Happily, I had a friend who turned me onto young Jimmy Buffett and — cheers! — my formative years segued into what seemed like one long tequila commercial.

Now I’m more than halfway through with my mortal portion and I’m wondering what happened to the Thoreau part of me. It still informs so much of philosophizing.

Heck, both my book and my blog titles hint at the benefits of the simple life, an existence devoted to companionship, reading and embracing the vivacious joys each day offers.

Yet, I spend my nearly every waking moment fretting about money and persistent fears of failure.

What gives? How did Thoreau throughout his entire life maintain his aesthetic core?

I decided to investigate. The answer was as plain as the nose on his face.

Thoreau never got laid! A man known for his earthiness never got down and dirty.

That has to be it.

Living in the woods for most any guy with drinking buddies would be a cinch. You’d never get lonely because your married friends could come visit. They’d bring beer, chips and maybe some woodsie wieners.

It’d be like an endless tailgate party, one where you didn’t have to worry about the daintiness of urinating in some stuffy Port-O-John.

Was his apparent celibacy self-imposed as, perhaps, a way to achieve higher understanding? Maybe not. This from the Thoreau Wikipedia “personal appearance” chapter: “Thoreau was a homely man, with a nose that he called ‘my most prominent feature.’”

Dissed by Wikipedia, one of the most bland websites in all creation! I can only guess Wikipedia’s never gazed in a Wikimirror.

So I don’t feel too bad I haven’t lived up to the Thoreau standard set in the revered “Walden.”

I’m blessed to have a darling wife and daughters. That I lay awake at night trying to conjure ways to be a better provider for them is a small price to pay for all they give me, even when prices to pay are for things like college, car insurance and new iPhones.

Then there’s this: I read it took Thoreau five years to sell 2,000 copies. This may be difficult for you precious millennials to comprehend, but the only Amazon in 1854 was a piranha-infested river in South America.

I wonder if the old technophobe would appreciate the irony that a Facebook page dedicated to him has 293,404 likes.

Me, I’ve sold more than twice that many “Crayons!” books in just four years.

And the poor guy died at just 44 after contracting bronchitis while walking in the woods during a thunderstorm.

What? You thought this apostle of the pastoral fell into a primitive combine?

On his deathbed he said what to me is the most blessedly elegant observation anyone’s ever made about the relationship between mankind and our creator. Had he, it was asked, made his peace with God?

“I did not know we’d ever quarreled.”

How profound. I’ve never written anything so sublime.

But the day’s young and The Pond is open for business again. And I can’t think of a better place to make a real splash than a place called The Pond.

Who is Edmund Pettus & how is Harrison Ford?