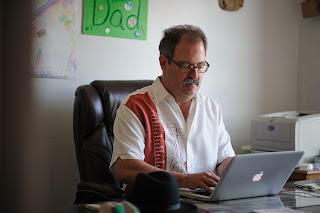 • For the sake of metaphorical irony, it'd be neat if old wives grew actual tails.

• I wonder if warrior Indians were bummed when they went to scalp a warring paleface and found him to be, dang, bald.

• My ego is so massive whenever I see my 15-year-old daughter texting in car I think she's telling friends, "My Dad's the greatest!”

• Malia Obama to enjoy gap year before college. My gap year was after Ohio University and in many ways I don't think it's ever ended.

• I predict some time in the next six weeks, Donald Trump will propose the presidency be decided based on the number of Twitter followers.

• Today’s the day when I begin annoying politically minded friends if the Electoral College has cheerleaders.

• World won't be whole until everyone either has or is a doting grandparent.

• John Lennon imagined a world at peace. Try and imagine how different people would look with rectangular nipples.

• I like to check books out of the library and imagine I'm having a lively conversation about it with all the previous readers.

• All you need to know about the taste possibilities of broccoli is no ones ever tried to smoke it or use it to make wine.

• I wonder if heaven is like life in that you like most people but sometimes duck down a different aisle to avoid them in the grocery store.

• Anytime someone says “the mind boggles” like it’s some kind of rarity, point out that the majority of minds do more boggling than thinking.

• Understand when someone saves your bacon, they're saving it so they can eat it themselves later. Bacon makes people selfish.

• How will we explain birds and bees to innocents once the bees are all gone? Birds and birds sounds like something that would upset NC guv.

• I wonder how many times designers of the first drawing board went d'oh when they failed said "Oh, well, it's back to the old drawing board.”

• It doesn't surprise me when scientists say Earth's been rotating for 4.53 billion years. What surprises me is it's never started to squeak.

• I’m spending the day pretending I’m getting from place to place using an invisible steering wheel. Try it. Make screeching sounds on bends.

• True serenity cannot be achieved until you realize the senselessness of trying to change the minds of the mindless.

• I’ve given it a lot of thought and the only thing I can conclude is the hospitality phrase “break bread” predates common table utensils.

• Some great thinkers try and achieve mind over matter. i wish I could master mind over things that don't matter.

• It’s not something you’ll ever hear marriage counselors say but many marriages wind up in stalemate simply because they involve stale mates.

• As parents, the fruit of our loins inevitably becomes the apple or our eyes, even when they're driving us bananas.

• I’m convinced we in America could end world hunger if for just one summer we agreed to cease all competitive eating contests.

• I wonder how often Hell has Congeniality contests and how long it’ll be before Bill Cosby wins.

• I wonder if there are any sloths who are disparaged by other sloths for laziness. Like, “I may be a sloth but Phil, man, he’s really lazy.”

• “All kidding aside,” are three words you’ll never hear me say in sequence. I’ll always kid. Kidding is forefront to my entire existence.

• Divorce rates will plunge when judges have discretion to make especially egregious husbands take maiden names of their ex-wives.