I fail the 4th graders: I didn't chew the poo 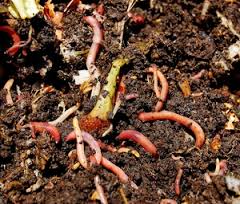 Regular readers have heard me audaciously boast about my many successes as a public speaker. They’ve read me brag about audience hosannas, huge paydays and the time that drunk said I cured his hangover.

So it’s only fair to report last week I bombed. Laid an egg.

For the first time ever, attendees came up to me afterwards and said I’d disappointed them.

I decided against gobbling down the fake worm poo.

It was a rare case of ignoring something that didn’t smell causing a real stink.

Yes, last week was the 8th annual year for me to bring my worm composting bin to Baggeley Elementary School. Lucy’s in the 4th grade and, like years before, they asked if I wouldn’t mind telling my Earth-friendly composting stories to the entire grade, about 60 children.

The worms are the stars of the show — and it takes a heck of a straight man to admit he’s second fiddle — actually, given their multitude, about thousandth fiddle — to the noble Eisenia Fetida.

And just try saying that Latin mouthful next time you’re wandering the aisles at the local bait shop.

But your typical 4th grader loves worms, especially the boys.

In fact, I stopped letting the kids handle the worms years ago after I suspected one of the lads had eaten one.

I thought about investigating the suspects, but realized the only way I could succeed was to find a child with baited breath.

See, that's part of the problem. I’ve by now got a million worm jokes.

It’s made me cocky, and worm cockiness is a debilitating hubris and I think a potential side effect of certain over-the-counter ED remedies.

So I thought this year I’d coast on my riffs and skip the worm poo consumption bit.

The gag — and it is a huge hit — involves me pretending a handful of dark chocolate chips in a baggy is actually nutrient-rich worm poo.

I hold the bag aloft and expound about its supple benefits, its agricultural advantages and how truly it helps save the planet.

“Not only that,” I say, reaching into the bag, “but the stuff tastes great.”

The first time I did that it got the greatest reaction to anything I’d ever done.

The girls shrieked, the boys cheered and out of the corner of my eye I saw one sensitive teacher double over like she was going to heave.

And that’s what they all wanted.

Instead, what they got was me eating lunch.

I didn’t want to reprise the same joke. Like any real artist, I couldn’t resist the urge to stretch.

So instead I brought out a little picnic basket and proceeded to remove items and quiz the kids as to what was acceptable for worms to eat. The discards included banana peels, apple cores, tea bags, shredded newspaper, etc.

All that went into the worm bin.

Then I took out a cut of leftover pizza and asked, “Would this be good for the worms?”

“No!” the kids screamed.

So who gets it?

The call-and-response took a few rehearsals, but I soon had them yelling “Mr. Rodell gets it!” as I wolfed down a pretzel, a slice of cheese, some pepperoni, a Vienna sausage and a Hershey bar. It was so much fun I was chagrined I didn’t bring a can of beer and a lit cigar.

Then, as usual, I opened it up to questions, which meant the kids spent the next 20 minutes asking if worms could eat shoes, buttons, bikes, baby sisters, etc.

My favorite question was from a tow-headed kid who asked in all seriousness if a worm had ever eaten a fish.

I told him, honestly, I didn’t know, but I could see the future and knew beyond doubt that one day he’d make a really fine blogger.

But my self-conviction it had been a smashing success was immediately shattered when two of Lucy’s classmates came up and asked why I hadn’t eaten the worm poo.

I told them, in effect, been there/done that.

Worse, Lucy said she heard the same thing from other classmates and if there’s one thing I cannot abide it’s the thought of classmates taunting my darling that her Daddy does NOT eat worm poo.

So if they have me back next year, I promise to happily, proudly and with gusto chow down on fake worm poo.

The 4th graders made me realize me not eating worm poo is like Springsteen not playing “Born to Run.”

And you gotta give the people what they want.

I pranked the trash man yesterday