Lebo: Seemed like the sun was shining just for me 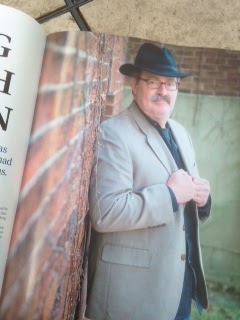 It was already destined to be a blue-ribbon day when the confused motorist asked me if I knew the zip code we were in.

“Thank you for asking me a question that didn’t involve math!”

I was back in downtown Mt. Lebanon. It was a beautiful and everywhere I went the sun seemed like it was shining just for me.

First, I snagged copies of the South Hills Magazine edition that has the story about me. It’s a 2,000-word feature by Suzanne Elliott. We’ve been friends for years, so she was very generous with her praise and descriptions.

Plus, it’s the first feature anyone’s ever done about me that includes what I’m going to consider my first album cover (Thanks, Megan Wylie Ruffing!).

It’s this luscious, gritty full-page shot of me leaning against a dormant-vine brick wall. I’m wearing a gray sports coat, black shirt, blue jeans and have a two-day stubble spiking my mug.

I didn’t think I could ever look that cool.

As this isn’t a day for depth, I’ll conclude here with a tease from the lead:

“Chris Rodell is the kind of person you could sit down and have a beer with.”

So what’s long been anecdotally rumored is now sanctioned with credibility.

It was one of those sunny days where the only thing that rained from the skies was blog-worthy material.

Because last night was my third year serving as word master for the Greensburg Rotary spelling bee for area 8 year olds. I feel very privileged to have secured what is now looking like a gig that’s mine for as long as I live.

I’m not being flippant, either. It is a privilege. Full report on the event next week (I think).

But the best part of the trophy day was why I’d been summoned back to 15228 in the first place.

A Facebook friend, husband of a girl I’ve known since we were 10, was looking for a lively speaker to entertain clients at a conference his money management firm. A wholly organic opportunity.

It was a paid gig and — FYI — here’s how the negotiations go when it’s a guy like me going nose-to-nose with a negotiator who daily deals in seven-digit transactions: I request an outrageous fee, agree to a counter offer that’s half that and walk away feeling like I’m getting three times what I deserve.

So we both depart from the negotiation pleased with ourselves and thinking, “Sucker,” about the other guy.

Essentially, I’m getting paid a princely sum to make people smile for an hour, and if I can make them happy for one hour, it makes me happy the whole week.

See, it’s what I’ve been doing my whole life. I just never got any scratch for doing it.

Everyone always said I was funny. My life-long struggle has been decreasing the percentage who thought it was purely unintentional.

That’s why this presentation was so special. It wasn’t just where I was raised.

The building was on my old paper route.

It was like I was being paid to talk about my life 500 feet from where it essentially began.

I used to delivery the old Pittsburgh Press along Castle Shannon Blvd. and Shady Dr. The big bundles would land on the sidewalk across the street from where Paul’s Pizza used to be.

Before I went to work, I’d slip a paper out of the bundles and read Mike Royko, the uproarious syndicated columnist from the Chicago Tribune.

I was 14. I’d read that and say, now, that’s what I want to do. I wanted to write newspaper stories like Royko did.

And blessed with the gift of prophesy, I’d say, “And the great thing about writing for newspapers is there will never be a strange new disruptive technology that will ever reduce the enduring significance of the home-delivered daily newspaper!”

My talk was very well-received. I was given a very warm introduction by my friend’s husband and if their attentiveness waned for even a minute I did not detect it. And they’d bought 15 books before I set foot in the door.

My confidence grows with each warm ovation from diverse groups that now range in just the past three weeks from retired school teachers to deep-pocket financiers.

Days like yesterday convince me one day soon it’s finally going to all start paying off, that I’ve found a lucrative way to tell my stories, one that’s impossible for fickle publishing industry poobahs to stymie.

On sunny days like yesterday, I believe the future is bound to be bright.

I just hope this bold prophesy turns out slightly better than the one about the future of newspapers.

Thanks for the laughs yesterday! Ya, I'm one of the folks in the meeting on your paper route. I used to read Royko too back in the day... Thanks also for signing my copy of your book too! If you ever get up north on 79 look me up. Ping has the pertinent info.

Now you've done it. Such cheerful flattery cannot go without me pestering you for your identity. I need guys like you to be regular blog readers. And check out the sample chapters for "The Last Baby Boomer" on www.ChrisRodell.com. It's my new novel. Either way, please do get in touch maybe on Facebook. We should be friends!

Sorry, but I don't My Face or Space Book. I may have to buy that book, being a baby boomer. In fact, I was born in 58 and graduated high school in 76, thus I would be the same age as the guy in the story. I often thought I might die of suicide at 102, but I wasn't sure if that would be years old or miles per hour. Then I decided, "Hey why not both!" That is until I read the stuff on the cover, now I have longer plans...

Oh an did I mention my initials are M A M which is almost M J M? And I even know some Dingus' though we don't talk either...

Yes, shoot for the longevity mark. Interesting things are bound to happen. Why don't you e-mail me at storyteller@chrisrodell.com and I"ll be happy to send you a signed copy to AbCap HQ. I have just one condition: If you like it, tell people. If not, please just keep it to yourself!