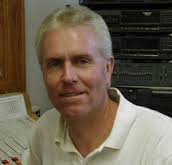 Days like today make it impossible to maintain our pledge to always stand for silly over somber.

What choice do we have?

Our friend Dow Carnahan, 56, has died.

An announcer for 30 years with WCNS, the hometown AM radio station, all the obituaries are calling him “The Voice of Latrobe,” which he was. He broadcast the Latrobe Wildcats high school football and basketball games and did the same duties for St. Vincent College. He also announced racetrack competition at the area speedways.

He did the news, too, and in 2013 and 2014 won the peer-awarded “Outstanding Local Radio Newscast” by the Pennsylvania Association of Broadcasters.

What I most respected about him was how little this kind, gentle man felt the need to speak.

Dow was a great talker.

He was an even better listener.

The distinction is key because we live in an age when people are celebrated for relentless volubility. It’s true in our politics, our celebrity and even in our small town bar rooms.

Loud, opinionated people — even the obviously ill-informed — dominate the room.

That was a big part of his appeal.

Back when The Pond was still The Pond and Dave Carfang was behind the bar and it was three-deep with happy guzzlers on Friday nights, Dow would often quietly saunter in after broadcasting a game down at Memorial Stadium.

You felt privileged if he came up and stood beside you for a drink. He’d share insider stuff on all the Pittsburgh teams and the big shot broadcasters who’d befriended him.

Everyone who knew Dow liked Dow.

You can say that about a lot of people, but mostly for logistical reasons. Most people don’t know many other people.

Again, this is a rare feat in a small town where youth sports are so dominant. This is the kind of town where sports editors for the local paper have been punched in the nose for not being sufficiently boosterish.

A friend of mine messaged me Saturday morning that Dow died in a movie theater Friday evening. Me and the rest of the local irreverents have been eager ever since to know which movie killed him off.

He was alone (his long-time girlfriend had died in August) and when the movie ended, staffers thought he’d fallen asleep and tried to rouse him.

To me, it’s a Hall of Fame death and an aspirational way to go.

I’m proud to say I’d been a guest on his popular Saturday morning talk show. You can check out the 30-minute interview at the WCNS Dow Carnahan link on my crayons page.

He said he’d taken “Use All The Crayons!” on a Mexican vacation so magnificently relaxing he spilled a pink drink on the pages. He showed it to me.

The tipsy desecration made me happy.

He said he loved the book and was going to apply the tips, one of which makes me feel slightly uneasy in the wake of his situational death:

It’s odd how some population decreases have a way of making some small towns feel bigger, less personal.

With Dow’s death, our communal identity is diminished. We’re no longer who we were.

His quiet passing, so much like his life, seems imbued with unspoken grace and dignity.

I’m already missing him so much.

So today, please, share a moment of silence for the passing of a beloved man gone too soon.


We’ll all miss that rare gentleman who could be as eloquent in all he said as as in all he left unsaid.
Posted by Chris Rodell at 9:14 AM

Well said Chris. Dow knew more about sports, in particular, local sports than anyone I have ever met. I remember those Friday nights at The Pond, and consider myself fortunate,to have had many great conversations with him. He was one of the nicest men you could ever meet, and I am proud to say he was my friend. Someone will take over his responsibilities and someone will do his job (they may even do it very well) but he will never be replaced, because you can't replace a legend, and that is exactly what he was.

Thank you. Well put, my friend.

Rest now Voice Man, your race is over.

Great tribute to an amazing man! Very well said! He certainly will be missed by all. Every year he would broadcast live from Latrobe stadium before Relay for Life did their opening ceremony. He interview relayers and survivors. He helped us spread the word. This instead of interviewing we will remember him with a moment of silence during our opening ceremony. Rest in peace my friend!