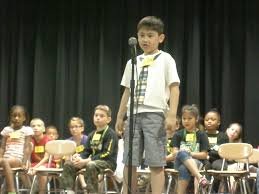 It was the kind of night that could do irreparable harm to my reputation. I deliberately made small children cry then did nothing to comfort the afflicted.

My instinct whenever I see tears streaming from a child is to immediately console. With my own daughters, I put my strong arms around them, pull them onto my lap and rock them back and forth until the tears soak my shoulder.

That didn’t happen this night.

I made precious children cry then did nothing. I just coldly and implacably stared them down and left them alone to wallow in their distress.

Of course, other fathers become alarmed when you rush to their 8 year olds to give them comforting bear hugs. Even I know that.

They get pissed when you do it to their wives, too!

What’s upsetting even to me is how much easier it’s getting for me.

That kind of callousness comes with the territory, I guess, when you’ve been word master for three consecutive spelling bees.

And I revel in that title: word master! It conveys a certain omnipotence. Sounds so much more grand than … blogger!

It’s impossible for anyone who hasn’t been there to gauge how tense it is in that auditorium when the bee begins to buzz. The lump-in-the-throat pressure is palpable.

And I’m the adult focal point. When years later these kids think of their spelling bee experience, a big part of that recollection will be me. It’ll be my voice, my face, that jumps to mind.

So I try and show up sober and check that my fly is up before the introductions.

Understand, it’s set up so I have it pretty easy. I’m not a judge or timekeeper. They’re the ones who decide how to deal with any controversies.

But my role is the most visible. The students, seated in rows on the stage, walk to a microphone before my podium. I ask them to spell a word like “jungle.”

Ideally, they look at the judges, but that rarely happens.

Instead, they usually look right at me.

And I begin to melt. They’re adorable.

It took a lot of discipline the first year not to silently mouth the letters to each contestant, so eager am I that every kid everywhere be considered a winner and each get a trophy.

Yes, I’m one of those guys.

Heck, I believe humanity will improve when we start giving participation trophies to all the crabby adults.

Words in Round 1 are fairly easy. There’s “moose,” “party,” “giggle,” and others any kid ought to know.

Except when they don’t.

The first girl to be dinged misspelled “honey.” She spelled it “h-u-n-e-y.”

And my heart broke into a million pieces. Guaranteed, the rest of her life, this dear little blond waif will break down in poignant tears every time her future husband says something like, “Honey, will you pass the salt?”

I think they keep having me back as word master because I keep it snappy. No dramatic pauses. No theatrics. I say the word then use it in a sentence. The pace is brisk.

Before you know it, we were down to just two, a boy and a girl. That meant it was time vault to the round of unstudied words.

In order to win, a student needs to misspell a word and the next child has to spell two correctly. It immediately looked like we’d be there through eternity.

Oh, how I despise psilent letters!

Happily, the organizers sensed the quagmire and decided after 15 minutes of failure to declare both students winners.

So was I! It had lasted nearly two grueling hours. I was exhausted. I couldn’t have gone on another minute.

It was a rare case where even the word master needed to rest a spell.