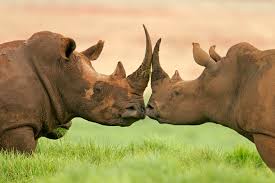 Todays’ example of man’s madness — and I mean man exclusively — is the plight of the endangered rhinoceros.

They tranquilize the rhinos from above, land, and then with a chainsaw hack off the animal’s most notable feature. They then apply purple disinfectant and revive the great beast.

They say this is necessary because poachers skip the surgical formalities. They just kill the rhino, take its horn and sell it on the Vietnamese black market where each one goes for $150,000.

None of the stories says how these men process the stuff. Do they take it as a pill? Dip a pinch like snuff?

If the directions say to sprinkle some on your pecker and then give the organ a vigorous stroking I think someone’s being swindled.

Removing the horn of a rhino wouldn’t be the most severe example of a man elevating the importance of his penis over the welfare of a sweet innocent.

That would be marriage.

No right-minded man would ever put lustful thoughts of selfish pleasure above the interests of his marital partner. Or so I was told in Sunday school.

No, I’m talking about the culinary castration of Loxodonta Africana, the African elephant.

I learned of this back in 2000 when Maxim magazine asked me to contribute to one of those routine round-up stories about living through unusual events. These included: What’s it like to survive a plane crash? To be struck by lightning? To walk on the moon?

Another was what’s it like to eat testicles. More commonly known as mountain oysters, the dish is made from pig, bull or sheep testicles.

I was lucky in that I was friends with John Clouse, the six-times married Evansville, Indiana, attorney who Guinness had for years listed as the world’s most traveled man.

A veteran of the Battle of the Bulge, he’d vowed if he ever survived that carnage he’d live an entirely original life.

I loved him. He died about six years ago.

I’d call him whenever I’d get an assignment about unusual human experiences because I knew he’d knock the ball out of the park — and that metaphor’s entirely accidental.

When I asked if he’d ever eaten testicles, he responded with a question of his own:

“I had some elephant balls once,” he said. “Will that do?”

“It was in a restaurant in Berlin back in 1968. The special was Elephant soup Burundi. The waiter explained it was made from elephant testicles. And, no, it didn’t come in a really, really big bowl.”

He said it had a robust tangy taste, but expressed disappointment that it didn’t turbo-charge his sex drive. Yeah, he’d screwed some angry German babe that night, he said, but it was just a garden variety boink.

Being alone in a dimly lit room with a naked woman who looks at me and says, “Oh, what the hell.”

I remember word-for-word my euphoric response the first time I heard that surrender. I said …

And we’ve lived happily ever after.

They say the rhino feels no pain from the horn removal, only a confusion I imagine is exponentially more acute than what I feel those mornings I wake up hungover and unable to find my wallet.

And I have to imagine it hurts when other bully rhinos taunt, “Well, lookee here! If it isn’t old purple nose!”

In India, trains & elephants share tracks; what could go wrong?