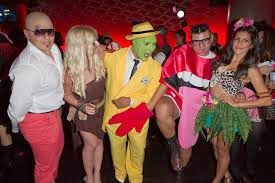 Some day I’m going to dress for Halloween like a guy who really loves Halloween. No one will recognize me.

Yet again what was once a one-day holiday has become Sprawl-o-ween. We had a great time in our little borough Wednesday night. They usually have Halloween on the Wednesday preceding Halloween around here because that’s when the volunteer firefighters meet and they don’t want to disrupt their scheduled.

They do such great work I’d never dream of complaining about them disrupting everyone else’s. So we’re doing Halloween again tonight on Halloween. It’s just too much for me.

I guess that’s just selfish because on Friday night’s I like to dress like a guy who enjoys BSing in the bar all night.

For those of you who enjoy Halloween, have at it. I hope you have a great time.

For those of you who enjoy witty @8days2Amish — new followers welcome — tweets, well, these will just have to do.

• Hope I’m on jury the day group of accused arsonists respond with the musical plea, “We didn’t start the fire! It was always burnin’ . . .”

• CDC reports on binge drinking are too ironically sobering for binge drinkers to bother to read.

• It’s surprising that a musical genre called hip hop doesn’t have a memorable song about the Easter Bunny.

• I love it when the wind makes the brittle leaves sound like they're applauding me. Or is it people in my head? Either way, I feel inspired.

• Just once I'd like to read a story about a some one shoplifting and learn the culprit actually lifted a shop.

• My phone message ends with, "And if this is a real emergency, please call 911," like people call me for medical advice

• It’ll be beneficial to both your healthfulness and disposition if you eat meals at places where food is prepared and not just assembled.

• The trouble w/ most people who blow their own horns is they rarely bother to obtain or learn to play actual horns. Hence, they merely blow.

• Funnel cakes and funnel clouds as threats don't seem like they'd be too different. Indeed, they are.

• I know it's going to lead to trouble, but I can't resist putting lit matches under ears of strangers and asking, "Are your ears burning?”

• It’s out of my realm of experience, but I sometimes cheer myself up by humming the "Movin' On Up!" theme to #TheJeffersons

• Bull-headed is meant to describe stubborn people. I prefer to use it in reference to people whose heads are full of bullshit.

• I reiterate: hyphen should be spelled hy-phen.

• There’s nothing hospitable about hospitals. We should call them docitals or discomfitals.

• We are all born free and spend the rest of our lives constructing prisons around ourselves.

• I so love baseball I'm intending to DVR tonight's final Game 7 and watching 2 pitches a night 'til spring training.

• I enjoying hanging with drunks ‘cuz you can tell same joke same way five times in one night and it’s always hilarious. Not so with sober wife.

• If ears had taste buds, mine would be salivating every time they hear Ray Wylie Hubbard.

• If everyone everywhere helped the people who are always helping people then no one no where would ever feel helpless again.