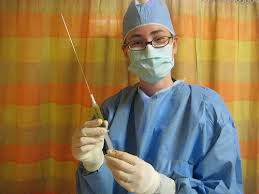 I felt an instantaneous wooziness that usually takes about three hours, two cigars and a half a bottle of bourbon to acquire more organically.

I’d gone to the doctor to have a small growth removed. I’d had it removed once before in 2009. It grew back. If friends said they didn’t notice it, I think they were just being polite.

My 8-year-old, an unflinching accountant of fatherly flaws, enjoys pressing it when I’m laying down until I say, “Doooot!”

To me, it was huge and ugly. My vanity would not abide it.

The doctor told me he was going to biopsy the mass to determine whether or not it was cancerous.

I told him not to bother.

I have foreseen my death and won’t be in some sterile hospital bed. It will be out of doors and it will be violent.

It’ll be in the year 2055 on my 91st birthday. I have a vision of me stumbling out of a local bar and right into the path of a speeding bus. Witnesses will swear they saw my soul shoot straight up to heaven and that my soul wasn’t wearing pants.

My death will make news all around the world because the bus will just miss striking Keith Richards, too.

I believe Keith will one day hear about what a great drinking buddy I can be and will venture to Latrobe to see for himself. And then Keith’ll never leave.

Moments before the doctor had been starting at my face and intermittently speaking a language that was either Latin or gibberish. His pretty assistant was taking notes and nodding like she understood and cared deeply about my pending disfigurement.

He told me I had nice skin.

I asked if he was hitting on me.

He pretended he didn’t hear me and just kept staring like he was trying to hypnotize me, which I’d be fine with if it’d save me a buck or two on anesthesia.

I view my body the way I view my utilitarian vehicle. I don’t love or pamper it. I demand it be mobile in all conditions and take without complaint the necessary beating it requires to travel with reckless abandon through all life’s obstacles.

I like that my body has a high pain tolerance and has survived some hangovers so severe they equate, I believe, to the female birth ordeal, but am baffled why it so weakens whenever a needle pierces the skin.

Of course, I like to think even John Wayne would wobble seeing a big needle coming straight for his eyeball.

What’s funny is right after the needle prick began my foreseen slide into oblivion is right when the doctor started feeling chatty. He began asking me a bunch of questions while he chiseled away chunks of my face.

“What do you write?”

I told him about the crayon book and slurred some examples. He liked the one about telling friends you’re going to open an art gallery and have them enter a room with nothing on the walls and be greeted by 40 guys who say nothing but, “Hi, I’m Art!”

“You know, I should write a book about being a dermatologist. I have some great stories.”

I told him I thought he was onto something. A book about a skin doctor would be a huge hit because none of the nudity would be forced or gratuitous. Throw in a little exam room bondage and maybe make the doctor a vampire and he’d have a bestseller: “Fifty Shades of Flesh.”

The whole procedure took about 6 minutes. They let me lay there with a cool towel on my forehead for about 20 minutes before I could resume mobility.

So in order to get rid of a small blemish no one really noticed, I’m now walking around with a huge navel-sized bandage on my face everyone notices.

People have been very considerate. They ask concerned questions and tell me they hope I’ll be all right. No one’s been jagging me.

You don’t want to see what happens when a guy like me gets needled.