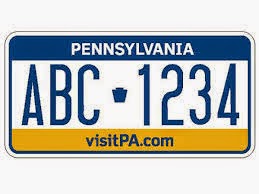 (701 words)
My 8-year-old daughter is like her old man in that she sees the world and recognizes it’s full of petty irritants.

That, to me, is just another petty irritant because it increases the likelihood that one day a guidance counselor will advise her the only thing she’s cut out to do is blog.

But unlike your typical blogger, she sees something that annoys her and she does something about it.

That’s how she began re-designing the Pennsylvania license plate.

And if that’s not an A-list roster for a historical party, I’m canceling my Entertainment Weekly subscription.

We’re Independence Hall, Valley Forge, Gettysburg, Kate Gosselin and Three Mile Island, the latter two being warning reminders that even the best places can be marred by human error capable of sickening innocents.

Yet, what is our license plate? It’s a bar of blue with “PENNSYLVANIA” in white letters above a white bar with blue license numbers atop a bar of yellow that in blue says, “visitPA.com”

How awful. How mundane. And subliminally urging motorists to click on a cheesy promotional website when they should be paying attention to driving is downright reckless.

What’s most infuriating is you know that some lame Harrisburg marketing firm was paid hundreds of thousands of taxpayer dollars to come up with it.

I could sketch a more compelling license plate on a beer napkin in less time than it takes to pour an actual beer.

How’s this? An image of Ben Franklin waving a Terrible Towel above the sudsy Franklin observation: “Beer is proof God loves us and wants us to be happy!”

I think everyone would love it, especially our plate-making convicts. The only thing worse would be a plate-maker in New Hampshire and having to make license plates emblazoned with “LIVE FREE OR DIE!”

The situation confounds even us ardent fans of irony.

My favorite PA plate was the simple blue one emblazoned in gold letters with the cheery motto: “You’ve Got a Friend in Pennsylvania!”

But state mottos can be easily satirized. I think it got to crooked legislators when newspapers kept headlining stories of their corruption with “You’ve Got a Felon in Pennsylvania!”

I still have an uproarious ’92 clip from a West Virginia newspaper that had snarky staffers responding to then Gov. Gaston Caperton’s $880,000 contract to replace the outstanding “Wild, Wonderful” plate motto with the lame, “A Welcome Change.”

“West Virginia: Where All That Government Cheese Goes”

“The Ballcap and Tube Sock State”

My daughter’s version has no motto, but features an enormous shining sun, two half-man/half-bird creatures waving finger wings, and our family (including the stupid dog) in a car about to drive to our certain death right into a huge tree.

And Pennsylvania is spelled differently.

Note: I said it was spelled differently, not incorrectly. I don’t judge and wouldn’t want to say anything that might stunt her elementary school creativity.

She’s very proud of it.

She should be. It’s far superior to our current plates.

So I’m going to send her drawing to Pennsylvania Governor Tom Corbett, who polls say is fighting an uphill battle for his second term.

And I’m going to tell Corbett if he announces my daughter’s stick figure drawing is the new state plate, well, he’ll have my vote. Hers, too, if he can hold onto office through 2024.

It’ll be a big deal.

My daughter will have seen something incredibly lame that didn’t work and taken positive steps to whip it into shape.

I just hope she never looks at me and realizes just how much her Daddy has in common with our Pennsylvania license plates.

Someone keyed my car: suspects abound