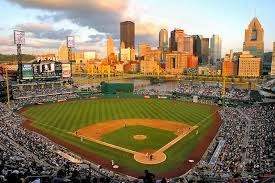 Sorry I didn’t have time to write about the Pittsburgh Pirates and their one-game play-in contest versus the S.F. Giants today, but I figured today’d be a good day to catch up on some stuff and that means lazy tweet round-up. I don’t know why I always feel compelled to sort of grade my monthly efforts. August, I thought, was great; September not so much.

My prediction for the Pirates v. Giants? I think the Bucs are gonna sweep ‘em!

• Wonder how much money I could make if I told people I could sell 'em skinny pills & sold 'em bottles full of pills with really slim waists.

• I sometimes wonder what God says when Jesus sneezes.

• Maybe people would read and observe the Bible more if it had more exclamation points. Agree? Yes!!!!!!!!

• Asking an 8 yr old to convey with brutal honesty the flaws in her father's appearance is a mistake a grown man makes just once.

• RIP Joan Rivers. It never would have suited you to be in "serious" condition for long.

• Daughters mocked when I said I used to have #McCutchen hair. Told them skepticism healthy. Grounded each 6 weeks.

• Many dads criticized for being helicopter parents, always hovering. Not me. I'm more of a sidecar parent, just along for the ride.

• The world would be much more serene if no one bothered to look in mirror until we’ve all had at least three good blasts of booze.

• A good mime can be safe, but never sound.

• How can a man be as secure in his masculinity as I am in mine and still feel sheepish about eating a banana in public?

• If I were a heroic crime fighter, I'd love to have Super Vision. But as a regular guy, I hate any supervision. Can't stand it.

• ”Spare the rod, spoil the child" responsible for more Biblically-justified wanton violence against innocents than any 6 words in history

• Ravens suspend Ray Rice. Know what that means? His agent arranging a seance with late owner Al Davis about getting client an Oakland tryout

• I’d like to know what goes on in the mind of a rabbit when it’s running along and suddenly comes smack into a really long cyclone fence.

• Every operational decision every gastroenterologist makes is in some way gut-wrenching.

• I couldn't believe NFL commish was fallible. Then I realized I'd been misspelling his name. I always thought he was GODell.

• We love “Seinfeld!” We love “Curb Your Enthusiasm!” Would Seinfeld have been funnier if Larry David had starred as himself/George?

• Anytime you hear of anyone dying suddenly, it should reinforce the need to ensure you're always living suddenly. #NeverForgetSeptember11

• The name causes some confusion among those casual about Egyptian folklore, but most Mummies were Daddies.

• That which does not kill me usually leaves me with a pounding hangover.

• All-you-can-eat restaurants are places where the crowd never thins.

• Cynics who do nothing but predict gloom and doom are misfortune tellers.

• FYI: The band Quiet Riot was neither.

• Too many people bury the hatchet and immediately begin looking around to see where they left the shovel.

• Most big box stores don't bother to sell big boxes and it's impossible to order chains at a chain restaurant.

• You’d think they'd know better, but people in the publishing industry are most apt to judge books by their covers.

• I doubt PETA would approve by I enjoy confusing the dog by barking out a loud fart when he's trying to poop.

• Celebrated 18 years of being married to a perfectionist. Know what that makes me? Too perfect to brag.

• Sing it with me! "Where have you gone, Derek Jeter? Our nation turns its lonely eyes to you! Woo! Woo! Woo!”

• What I tell my daughters ev'y night: "May tonight you have the world's greatest dreams and may tomorrow all those dreams begin coming true!”

• I’m so Old School I remember when bar codes were unwritten rules about how men and women behaved in places that served alcohol.

• Yes, it's a long way to Tipperary, but if you're in Kilfeacle you can make it on foot in about an hour.

• I wish ill on no one, but for the sake of our collective cool I hope Ringo doesn’t become our longest living Beatle.

Email ThisBlogThis!Share to TwitterShare to FacebookShare to Pinterest
Labels: 8Days2Amish, Chris Rodell blog, how to write funny tweets, Use All The Crayons, www.EightDaysToAmish.com