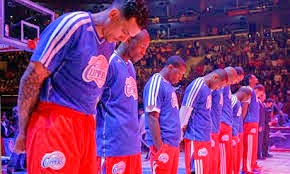 Well, it looks like I actually do have something in common with billionaire racist Donald Sterling: neither of us will ever attend an NBA game for as long as we live.

He shuns minorities. I shun expensive sporting events sure to bore me.

There are many questions. The one I would most like to hear Sterling answer is, “Sir, you dislike associating with blacks. What was it about owning a professional basketball team that seemed like a good idea? Was hockey too complicated?”

Really, I imagine owning the LA Clippers was his runner-up choice after his lawyers told the incredulous bigot he was not allowed to own slaves.

I’m always pleased when people note the homepage sidebar that details which books I’ve been reading. Lately, I’ve been re-reading some of the classics. They enrich my soul.

One you won’t soon see on the list is “The Bonfire of the Vanities.” It’s the 1987 Tom Wolfe bestseller about race, greed, ambition, lust, status and the petty emotions that fuel any great national scandal.

I remember enjoying it, but can’t now recall just why. I think it’s because all the miserable characters behaved in ways that would have prevented me from ever wanting to be friendly.

And there’s no need to re-read Wolfe’s book when we’ve for the past week been witnessing The Bonfire of the NBA Vanities.

Almost anyone with anything to say is despicable.

There’s ample reason to despise V. Sivano, the woman who goaded the 81-year-old Sterling into his racist rant. Heck, she’s hate-worthy if for no other reason than she’s getting away with referring to herself with the initial V.

People say what she did was wrong, that it’s reasonable to assume a right to privacy in one’s own home. Ideally, yes.

Me, I go through life under the wise assumption that everything I say is being taped and I’m under constant video surveillance.

It doesn’t bother me at all, really. My behavior is much better, my posture’s improved and I often walk down the streets wearing a nicer shirt than the ones I wore before the NSA began its eternal snoop.

NBA greed-meisters should be ashamed of themselves for allowing Sterling to for 30 years fester in their midst knowing he was a bitter bigot in a game dominated by African-Americans athletes in a world desperate for athletic African-American role models.

That we could use even just a few more white role models, too, goes without saying.

I despise the National Association for the Advancement of Colored People for being repeatedly honoring a known slumlord who in 2009 agreed to pay a $2.73 million fine for discriminating against colored people.

I hate every opinionated poser that gets on TV and says he or she is certain of the moral and legal implications of the NBA stripping an owner of his private property.

How dare they? Who do they think they are?

I’m disdainful of every talk show host, caller and barstool bigot who says this is a First Amendment issue and that one of America’s bedrock principles is the right to free speech.

But what is also true, as every married man instinctively knows, there are consequences to saying controversial or stupid things.

So if you own a business enjoyed by black people or white people who don’t mind black people and think everyone deserves a fair shake, then you’d better hope another demographic will rise up to compensate for the revenue you’re bound to lose when it is learned you don’t like black people.

So, yes, you can say you don’t want your tarty little girlfriend to post social media pictures of her cuddling with Magic Johnson, but if someone hears you say that — someone like, say, Magic Johnson — there will be consequences and they may be dire.

So I guess me saying there’s no one coming out of this looking good was a bit of an overstatement.

And there is one group of that is coming out of this standing head and shoulders above the rest.

And that’s the players — and they’re doing so for reasons that have nothing to do with freakish height.

Their reaction has been exemplary. They didn’t threaten. They didn’t fume or incite. In fact, for men so prone to preening and bombast, they’ve been most eloquent when they’ve said nothing at all.

These giant and wealthy men looked like their feelings had been hurt. They were sad. It was very poignant and a very adult reaction in response to hate.

I found it admirable.

They just cheered the Clippers.

It’s nice to know at a time when we needed good men to stand tall in the face of ignorance and bigotry, heroes perfectly built for the task were right there at center court when we needed them most.

Mandela, “Marshmallow World” and humans who love to hate