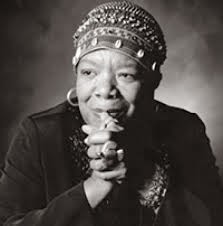 It was a very cheap and tasteless joke at the expense of a revered woman of tremendous international consequence.

Still, I made it because it’s funny and that’s the whole point of making jokes.

I always feel bad any time a famous poet dies because I have no appreciation for famous poetry.

Of course, a famous poet dies only once every 25 years so the occasion rarely troubles me. It’s not that being a famous poet guarantees one near-immortal longevity, it’s just that so few poets ever become famous.

Now that Angelou is gone, can anyone name another famous poet?

I tend to think of poets as being lyricists too lazy to learn guitar.

If my 13-year-old daughter read that aloud to me for an honest critique, I’d gently advise her to seek career opportunities in the math or science fields because as poems go that one just kind of sucks.

Of course, fans know those are the first four lines from the first song of the very first album Bruce Springsteen ever released. It’s “Blinded by the Light” from 1972.

It makes me feel utterly joyful. Not so much because of the haphazard slapdashery of the words, but because I instinctively hear the guitar melody that is going to propel me through the whole song until it is finally revealed to Mama where the fun is.

But try reading it without the music skipping through your head. As poems go, it’s a mess.

One of the things I sense many poets like about writing poetry is that there are no rules. You can say what you want how you want.

That’s going to change if one day I’m every put in charge of poetry, a position that, I’m sure, would pay only slightly less than hometown blogger.

First of all to me a poem must rhyme. If it doesn’t rhyme then to me it’s just talking without discipline and even toddlers and mumbling drunks can do that.

And a good poem should be short and easy to remember.

That’s why to me the greatest poem of all-time is by an unknown savant who was probably paid minimum wage by some mom ’n’ pop operation looking for a way to remind its customers to be do their job for them.

Bask in that for a moment. It’s concise. It’s informative. It’s memorable. It suggests action.

And, boy, that son of a bitch really, really rhymes!

I swear nothing Shakespeare’s ever done comes close.

The fact that convenient advances in home movie viewing has now made it incomprehensible to two generations of tech-savvy kids does nothing to diminish its impact.

Angelou’s death did give me an opportunity to look up what I’ve been missing and it’s been a lot. Check out some of these magnificent lines:

• “The need for change bulldozed a road down the center of my mind.”

• “Try and be a rainbow inside of someone’s cloud.”

• “I’ve learned you shouldn’t go through life with catcher’s mitts on both hands. You need to be able to throw something back.”

Aren’t those beautiful? I particularly like the last one.

Isn’t it a pity I didn’t know they existed until the day after she’d died? I should have been following her on Twitter instead of former SNL funnyman Kevin Nealon.

But don’t blame me. She’s the one who decided poetry was the best vehicle to spread her ideas.

Imagine her renown if she’d have years ago attached her soulful gifts to someone who could compose a snappy tune?

I’m thinking of the guy famous for singing often inarticulate lyrics like these:

Oh! Candy and Ronnie! Have ya seen ‘em yet? Oh, but they're so spaced out!
B-B-B-Benny and The Jets
Oh! But they’re weird and they’re wonderful. Oh, Benny, she’s a really keen
She’s got electric boots! A mohair suit! Ya know I read it in a maga-Zeeennn!
Oh, ho! B-B-B-Benny and the Jets!

Cut me open and I’ll bleed Elton John/Bernie Taupin songs. It’s a key part of my musical DNA. But Taupin’s a very mediocre lyricist whose reputation is elevated because he happened to pair himself with a genius.

But the honors that will flow forth when Taupin dies will in some ways equal those bestowed on the truly great Angelou.

Kids, if your soul yearns to compose poems, take the time to learn how to at least plunk out a tune on a piano or a guitar. Give yourself a chance at glory, acclaim, adulation and a decent living.

Or maybe get your hands on a book by the great Shel Silverstein and see how one of the most under appreciated poets/artists of the last 100 years did it. And he’s one of the very few who did it all.

That’s enough from me today. I’ve got to start planning next week’s blog topics.

The Springsteen show and when music mattered

Daughter, 7, says God is dead: Is Elton to blame?

My wife for president
Posted by Chris Rodell at 10:26 AM