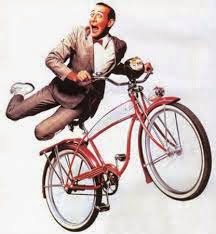 That I haven’t golfed yet this year will be rectified Sunday when a buddy of mine comes to Latrobe to visit. He’s the second most impressive person I know and if he ever wins four Masters championships he can be considered for the top tier right along side Arnold Palmer.

He’s the retired captain of a United States Navy Ticonderoga-class guided missile destroyer. He was responsible for a crew that exceeded 400 men and women.

He’s one of the world’s greatest storytellers and can silence a room of drunken golfers when he starts talking about steering 9,600 tons of weaponized metal nearly two football fields long through the mine-strewn Strait of Hormuz.

So this guy’s nothing like those other two nautical leaders with whom I’m familiar, Merrill Stubing and the big guy in the blue shirt that calls Gilligan little buddy.

It’s like me getting to spend a day with John Wayne.

I guess it’s like for him getting to spend a day with Pee-wee Herman.

But he’s a fan of the blog and I’ve heard him praise my book to strangers, which I find very odd for a man of his stature.

You’d think with all those aforementioned responsibilities, the Navy would drug test its skippers.

That’s why I’m chagrined he can’t do a damn thing about the dreary weekend weather.

It’s getting me down.

I’d love to have a beautiful day to golf and tomorrow I’m driving to Morgantown, West Virginia, for an afternoon book signing at the University Center Barnes & Noble, the latter booking a bit of a miscalculation on my part.

See, tomorrow’s perennially one of my favorite Spring days and I always make a big deal out of it. I start the day waking the whole house when I blast the bejesus out of The Rolling Stones 1971 song, “Dead Flowers.” The girls all know what that means.

They by now know I’ve played “Dead Flowers” first thing every Kentucky Derby Day since college ever since me and a buddy were listening to “Sticky Fingers” and he noted that the great twang country song makes a glancing reference to the horse race.

“Well when yer sitting back in your rose-pink Cadillac
Making bets on Kentucky Derby Day
I’ll be in my basement room with a needle and a spoon
And another girl to take my pain away . . .”

I love the day’s pageantry.

And I’ve in the last few years acquired a fun new Derby Day tradition. I harvest and supply all the fresh mint for Dave’s delicious Mint Juleps down at The Pond.

I heard him complaining a couple of years ago about how difficult it was to find ample mint. I told him it grows wild in the woods around my house. I could bring him buckets full.

And that’s just what I did. The girls and I each year scatter around the property and snip big leafy stalks of the stuff.

The girls enjoy it and it gives me a chance to reflect on what it means to be a Dad, how the girls will always remember this every Derby Day and just how different our lives would be if mint were marijuana.

But this year, it’s been so cold and miserable the mint has yet to burst. There’s not enough to refresh even one measly glass of iced tea, let alone dozens of traditional Derby Day treats.

If mint were marijuana nobody’d even be buzzed.

This is going to seem abrupt, but I have to end now. I have a race of my own to run.

Dave’s stopping by to film me answering FAQs about my book. The short shoot will include a brief tour of the office, which I understand people are curious to see. If all goes well we’ll put it on YouTube later this afternoon.

And if all doesn’t go well, does anyone really care?

Horsin’ ‘round in the ol’ Breed Barn