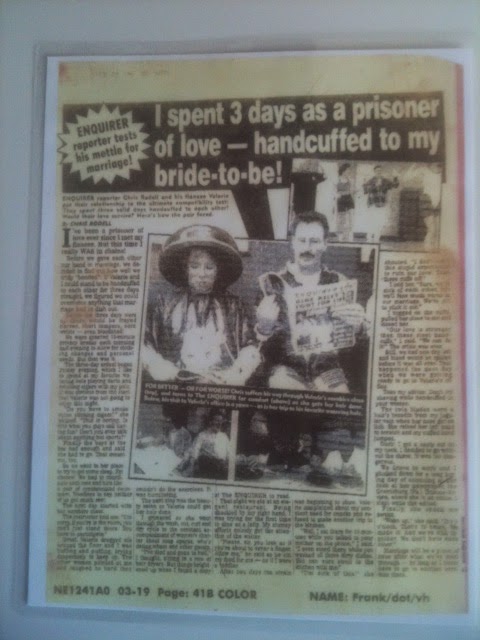 (1,360 words)
I’m always appreciative when natural human curiosity overcomes professional reserve when I hand someone an offbeat story clip. That’s what happened with Michael the other day at the FedEx store where I went to get an 18-year-old National Enquirer story laminated.

I hadn’t seen it for 5 years, hadn’t read it for 10 and now I wanted it preserved forever.

Although the story never ran, it remains one of my all-time favorites.

Why it didn’t run was never fully explained. I think I remember my editor saying the publisher rejected it at the last minute saying it was “too over-the-top,” which struck me like an editor at Bon Appetite rejecting a story on the grounds it appeared “too tasteful.”

I know I got paid $1,000 for it and they’d sent me a fax of the story with a run-date stamped on the bottom.

That’s what I handed Michael, just one of those old flimsy black and white fax pages upon which so much commerce used to be conducted.

I told him it was 1996, back in my heyday of doing swashbuckling Enquirer stories for the nation’s most notorious newspaper. I did more than 1,000 stories for them from 1992 through 2000. It’s not something many journalists would brag about.

I brag about it all the time.

It was great fun and paid well.

The Enquirer in the 1990s was what TMZ is today times 10. They had the scandal field all to themselves and broke the news that set the beat that had the whole country dancing.

It was the O.J. Simpson and Judge Ito, Woody and Soon-Yi, Joey Buttafuocco and Amy Fisher, Nancy Kerrigan and Tonya Harding, Monica Lewinsky and Bill Clinton, Burt & Loni, and on and on and on. The merry carousel never slowed.

I didn’t do much celebrity stuff, but was relied upon to do the offbeat features. I did as many as four a week.

They used to bring me into the Lantana, Florida, offices for two weeks at a time, just to meet the gang. It was wonderful. So many colorful and lively people. And, man, after work when we’d all go to the bar the stories I heard were truly the most amazing in the world. I treasure those memories.

They wanted me to work there full-time, but I love western Pennsylvania and I envisioned a career that would eventually involve more lucrative creative writing.

Yes, even then I suspected I’d one day be a blogger!

But while I was doing it, I really gave it hell. My antenna was always up for lively features that would make the demanding cut. That’s how I ended up with the story that wowed Michael.

That’s how I ended up spending 72 hours handcuffed to Val.

I remember reading a story about a Georgia girl who was so chronically truant the fed-up judge ordered her lashed to her negligent mother. It was a bit of Old Testament justice that drew national interest.

It got even bigger when the mother went out of her mind. She had a nervous breakdown. She raved that being that close to someone so wild drove her crazy.

I tried to divine a way that would make the story relatable to Enquirer readers and when I thought of one, I pitched it to my editor. It went something like this:

“Enquirer reporter spends 3 days as a prisoner of love — handcuffed to his bride-to-be!”

We’d have 15 minute privacy bathroom breaks, but the rest of the time we’d be chained together. It was six months prior to our September wedding date.

It got an instant green light. They were on fire for the story. We’d need to engage in all the scenarios typical couples do together and apart.

The story begins: “I’ve been a prisoner of love ever since I met my fiancee. But this time I really WAS in chains! Before we gave each other our hand in marriage, we decided to find out how well we truly ‘bonded.’ If Valerie and I could stand being handcuffed to each other for three days straight we figured we could overcome anything marriage had to dish out.”

I’ll have to find a way to post the entirety of the joyful hokeyness of all that followed. I think one of the reasons why I’m all of a sudden so enamored with it is I don’t think any of the words are mine. It was an invigorated team of Enquirer editors and writers using Val and my scenario and the four pictures to tell their story of our ordeal.

Reading it feels like watching a soap opera in which she and I are the stars.

“The three-day ordeal began Friday evening, which I like to spend at my favorite watering hole playing darts and smoking cigars with my pals. It was obvious from the start that Valerie was not going to enjoy this night. ‘Do you have to smoke those stinky cigars?’ she whined. ‘This is boring. Is this what you guys call having fun? Don’t you ever talk about anything but sports?’

“Finally the boys at the bar had enough and said she had to go. That meant me, too.  So we went home to get some sleep. Fat chance. We had to coordinate each toss and turn like a pair of synchronized swimmers. Needless to say, neither of us got much rest.”

We went to her aerobics class the next morning. There’s a picture of me looking bored being handcuffed to her, our arms rising with the dance music.

Then she took me with her to the beauty salon, which became the dominant picture. It’s a shot of her sitting under a big hair-dryer and me chained next to her reading a national magazine.

Care to guess which one?

“I grimaced as she went through the wash, curl and dry cycle to the constant accompaniment of women’s chatter about soap operas, who’s dating whom and other gossip. But things brightened up when I found a nearby copy of National Enquirer to read!”

As we were on Enquirer expense account for the entire time, I took her to dinner at The LeMont on Mt. Washington, Pittsburgh’s finest restaurant.

Oh, what a delightful stir we caused, a bright young couple handcuffed to one another, but the staff never missed a beat. When I nearly severed my jugular with a steak knife, the waiter stepped in and cut my food into tiny little kiddie bites like mommy used to.

The drama crescendos toward the end when my fair damsel cracks up from the stress of our endless togetherness.

“‘I’m sick of this!’ she shouted. ‘I don’t want this stupid experiment to ruin our love. Take these infernal cuffs off!’

“I told her, ‘Sure, baby, we’re sick of each other, but we’ll face much worse in our marriage. We’ve got to stick it out.’ I tugged on the cuffs, yanked her close to me and kissed her. ‘Our love is stronger than these steel handcuffs,’ I said. ‘We can make it!’ The crisis was over.”

Some day our daughters will find this and absolutely howl at the discovery.

Michael read the whole thing and just roared with laughter. He asked if he could make a copy for himself before he laminated the fax.

Be my guest. He made two.

And what a lucky thing he did, too.

Because what neither of us knew at the time was that putting thin fax paper into a hot laminating device will incinerate the fragile paper. It came out looking like a marshmallow that was left to toast too long in the campfire.

It would have been the only copy.

It was a story I’d forgotten about for years and now it seems so unbelievably precious to me.

It’s endearing, too, because the Enquirer romantics who so gleefully penned it made sure the story had a happy ending. It’s just so sweet and funny.

My National Enquirer “Greatest Hits!”
Posted by Chris Rodell at 11:06 AM

How come everyone always sides with her!