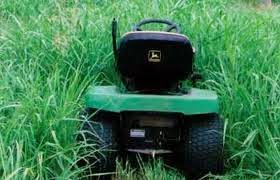 (927 words)
Think growing grass in Colorado is controversial? You ought to stop by my house where the people aren’t high, but the grass is.

Because of my annual involvement in a silly contest I’ve yet to cut my grass. It looks like the backdrop from one of those safari nature shows. A hundred-head herd of bison could graze there and never go hungry.

Every year me and my buddy Paul see who can go longest without first cutting the lawn. There’s no wager, no stakes, just pride of a job, well, not done.

It’s partly because I’m philosophically opposed to ever mowing the lawn.

I’m patriotic. Can you imagine how much fuel America could save if we all agreed to cut the lawn just once a month? Arab sheiks would overnight become our baristas.

And just think of the boon it would mean to leisure life, which is the priority element of my entire existence.

Paul used to really gloat about it. It’d be this time of year and he’d asked if I’d cut my grass.

“I’ve yet to cut mine even once. So if it takes you about an hour to cut your grass, then I’m up six hours of bar time on you.”

So if he’d cut his grass to about an inch, the demarcation line between his neatly trimmed lawn and my shaggy one looked to passing motorists as dramatic as one of those night time satellite pictures over the Korean peninsula where the South is bright and illuminated and the North appears desolate.

This contrast, too, could be seen from outer space.

But I was less of a free thinker back then. I’d bend to prevailing conformities. So he’d cut his grass and in the next day or so I’d feel compelled to cut mine to match.

I finally figured out a creative solution to that vexing neighbor conflict.

I packed up the whole family, all our stuff, and we moved to a house up in the woods with no adjacent properties. Cars roar past at 50 mph, too quick to tsk tsk my casual landscaping. The only people who’d ever see it were the garbagemen who didn’t give a crap and the kids’ school bus driver and the only opinion of hers I care about is whether she thinks it’s wise to get gooned up before she drives my kids to and from school, so we were cool.

Between Paul and I, it was game on.

He is a formidable foe. I think he beat me three years in a row. I didn’t taste victory until the fourth year when our new garage door fell victim to failed mechanics. Improperly installed, it wouldn’t open and needed parts shipped in.

And if the door didn’t open, it was impossible for me to for three weeks in May get the mower out. It was as if my trusty John Deere tractor was a twin-bladed ship in a bottle.

It went on so long one of the neighbors said he thought we’d moved.

We’ve traded the title been back and forth the last few years. We really should have some kind of trophy, maybe of a guy passed out in a hammock, or maybe the loser should present the winner with a bouquet of weeds.

This year the pressure’s been torqued up on me. Josie, 13, confronted me with her uneasiness about the height of the grass. She’d been playing catch out front with the dog and couldn’t find him for an hour.

“You really need to cut it, Dad,” she said. “It’s getting embarrassing.”

“You’re embarrassed by grass?” I asked before roaring with laughter. “You just wait, hon! In a couple of years you’re going to be nostalgic for the days when the only thing about me that embarrassed you was my idea of lawn care! I’d advise you to go have a heart-to-heart talk with your mother about the fatherly sorts of embarrassments your future holds. ‘Ooh, Daddy, the grass is too high!’ Ha! Good one!”

That’s why I was devastated Tuesday when Paul told me news that meant this year the contest would be mired in controversy.

“My neighbor got so disgusted by the look of my lawn he came over and cut it himself. I was inside hiding behind the curtains watching him the whole time. I had to stop myself from running out and showing him where he’d missed a spot.”

“Now, hold on,” he said. “I didn’t cut my grass. My neighbor did. My lawn mower hasn’t left the garage since October. My grass is cut, but I didn’t cut it and neither did my lawn mower. And I didn’t pay to have it done. I haven’t even thanked the guy.”

It was cunningly brilliant. He has his neighbor trained like a tractor-riding chimp. He now has zero incentive to ever cut his grass again. He think’s he’s won.

And the kid won’t be licensed to drive a John Deere tractor until 2017.

Reduce deficits: grow grass (not that kind)
Posted by Chris Rodell at 8:46 AM