"Use All The Crayons!" YouTube promo (behind the scenes)! 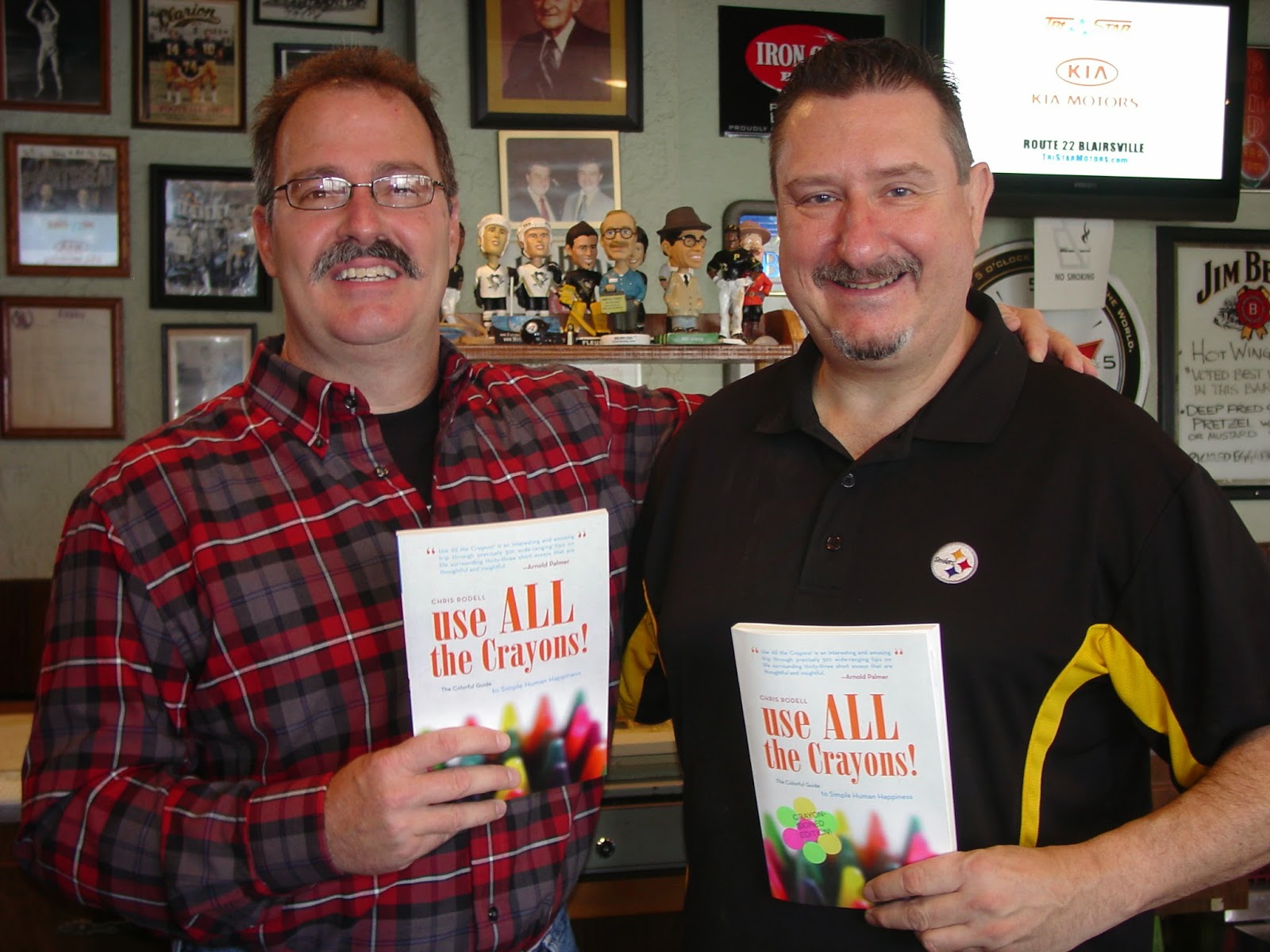 (1,060 words)
First off, I think our my initial mistake was having Dave Carfang and I appear as ourselves in the “Use All The Crayons!” FAQ video we produced and posted last week.

We should have hired actors.

I’m thinking Morgan Freeman for me and Ellen DeGeneres for Dave.

Having the great Freeman, an Oscar-winning 76-year-old African-American, play me, a white 51-year-old blogger/author/worm farmer, would be controversial among people to whom race most matters and controversy sells books.

I could maybe have met Bill O’Reilly!

I can hear the questions: “Did you feel like you had to pander to the blacks?Couldn’t you maybe have just acted a little blacker yourself?”

And casting Ellen to play Dave would just have been funny so that would have been worth it.

As it was, in addition to acting, I designed and dusted the set, wrote the screen play, directed and co-starred. I almost earned catering credit, too, but Dave wasn’t in the mood for Frito’s.

Oh, if only you could seen the conceptual version in my head!

It’s none of those things. It’s verbose. Sloppy. Sluggish. At 6 minutes and 32 seconds, I’d say it’s kind of flabby.

But it was economical. We did it in one take.

As there is no additional footage over which aficionados can pour, you’ll have to consider this the director’s cut, the behind-the-scenes peek that explains what we were thinking.

And what were we thinking?

I think it was this: “This is something really weird for two adult males to be doing.”

So it’s a good thing I didn’t include a scene were we look soulfully into one another’s eyes and kiss.

But I was intent on having something on YouTube that might further my mission of snagging speaking engagements. I thought it would be helpful to have someone interview me and post the answers to questions any perspective event planners might have.

No detail was overlooked.

I made sure my big poster of the cover was in the background. That’s what they in Hollywood call “product placement.”

In the background, careful listeners will hear Bob Dylan singing my favorite line from “Where Are You Tonight?” the 1978 rocker from Dylan’s “Street Legal” album. Many people have heard me quote it when they say how great it must be to have been my own boss for 22 years.

If you don’t believe there’s a price for this sweet paradise
Just remind me to show you the scars!

I gave Dave two minutes to read over the script before we rolled. I knew he didn’t have much time. The Friday lunch crowd was starting to come in and he’s yet to making acting in my cheesy promotions his priority.

Nerves, unfamiliarity with his lines and having to read and simultaneously operate the camera are the reasons why the camera sometimes shakes so bad my head completely disappears from the picture.

You can hear the script rattling as he pauses to turn the pages.

It was so bad, YouTube noted the chaotic filming and asked if I’d like to apply a stabilizing technique to the clip.

Never. I was as always striving for authenticity and I’d no sooner stabilize the film than I would stabilize Dave.

Some of my favorite parts are when I forget my own answers to my own questions and offhandedly ask Dave for a prompt.

“So, what makes your book so special, Chris?”

I went blank and ad libbed, “Well, that’s a great question, my friend. But could you be more specific?”

“Sure! Do people often buy more than one copy?”

That’s true, too. In fact, everything I say is true. It’s just that I say it in so many contrived ways it sounds like I’m really laying on the old bullshit.

My favorite part of the video occurs at the 4:18 mark when Dave asks, “A lot of people have read your blog, ‘Eight Days To Amish,’ and are curious about your office space here above The Pond. Mind if we snoop around a little bit?”

This was the part I did my most detailed directing. I told Dave to take the camera and slowly walk around the apartment showing the layout and all the neat stuff I have on the walls and ceilings. I thought people would get a kick out of seeing what it’s like for me to work in what is in essence a giant scrapbook.

I even walked around with my hands up making a little finger box like I’ve seen the real directors do.

So Dave asks the question and starts to pan away toward the corner.

It’s like he’s been hypnotized by the Bose stereo cabinet (made it myself in 10th grade!) sits surrounded by 50 bright copies of the book (more product placement!).

It’s like watching a Derby horse that can’t leave the starting gate. Then he starts making little observational noises like, “Hmm,” and “Ahh!”

You can hear me faintly in the background shooing him away, “Move, damn it! Don’t just stand there! Go!”

Area casting directors take note: it becomes obvious he takes direction well, because he races through the rest of the tour so quickly you can hear him starting to lose his breath.

It concludes with me thanking Dave and inviting everyone to come visit us both at The Pond.

I mean everyone, but I’m talking specifically to you, Morgan Freeman and Ellen DeGeneres!

Until that happens, I’m thinking of other ways to entertain and enlighten our little audience.

You know what that means.

Golf Channel at The Pond, a snappy recap