After 15 years, turning the page on golf calendars 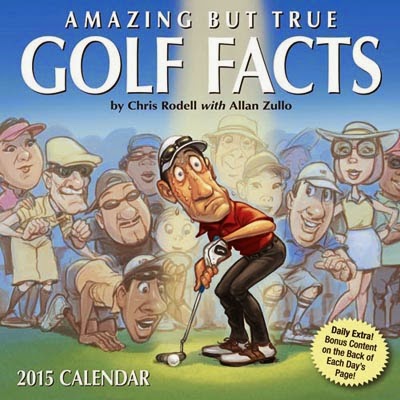 This signals a big change in my behavior from the years 1998 through 2013, a span when I’d have been sure to learn all I could about the bride, the florists, the menu, the guests and if the groom said anything cutesy-pie during the vows.

And I’d have written it all up in sparkling little easy-to-digest bits of between 20 and 80 words each.

Am I less romantic? Dissatisfied with Scott’s golfing? Heartbroken that the PGA’s most eligible bachelor won’t be saving himself for one of my daughters?

It’s none of that.

It’s just that time moves on.

And now for me and golf news, it’ll no longer move along one page at time.

Last month I ended 15 years of authoring the popular “Amazing But True Golf Facts” page-a-day calendars. They’re a very big deal with a lot of golf people including the man who to all of golf is The Man.

Yes, Arnold Palmer keeps one on his desk here in Latrobe and in Orlando. “I read them every day,” he told me. “And I’ll often tear off the ones I really like to tell friends about later on. I love the ‘Amazing But True Golf Facts.’”

That quote, by the way, became an amazing but true golf fact of its very own.

It started about 15 years ago when a friend of a friend called and asked if I’d ever wanted to write page-a-day calendars. I had not, thinking at the time that kind of work should be saved for experts like “Far Side” cartoonist Gary Larson.

But it paid decent, seemed easy and potentially fun. So that first year I did a golf and a fishing calendar and over the years did ones about dads and grandparents, too.

The friend of a friend was Allan Zullo. He turned out to be a great guy and one of the best friends I’ve never met. He lives in North Carolina and our paths have never crossed, despite working closely on dozens of projects over the years. Like me, he’s an old National Enquirer reporter who eventually grew up, only way more than me (he’d never dream of blogging).

He’s written more than 100 nonfiction books on the whole array of human interest topics. One of favorites is one about country song titles called, “Butter My Butt and Call Me a Biscuit.” He’s done more than a dozen fantastic young reader True Tale books about things like heroes, amazing pets and haunted schools, kids and babysitters.

I’ve read each and every one of them aloud to our daughters at bedtime and they’ll remember them — especially the ghost stories — for as long as they live.

He’s paid me tens of thousands of dollars over the years and for that I’m certainly grateful, but the time I’ve spent reading his great stories to our girls at night has been the very best thing that’s come from our friendly long-distance association.

That and just getting to know Allan. He’s the best.

So why would I cease doing golf calendars?

They were making me insane.

Like with the Scott wedding, I’d become immersed in golf minutia for about six months a year.

I know the first metal golf wood was used in 1891, that the world’s longest golf course is 8,335 yards long and is in tiny Massachusetts, and that Gary Player only eats bacon when he thinks no one is watching.

I became an impossibly annoying golf partner. Any casual comment would launch an tidal wave of meaningless golf trivia.

I remember one time a friend said his bladder was full and he couldn’t hold it till we got to the clubhouse. I said:

“Did you know that when it comes to holding it, nobody can beat Jim Thorpe, and I’m talking about holding golf balls. His hands are so big he can hold eight golf balls upside down with each mitt. Thorpe is the ninth of 12 children born in Roxboro, North Carolina. His dad was a local green superintendent. He spent one year in prison for tax evasion, but is still beloved for his community generosity.”

The guy said I talked too much.

I asked if he was insinuating I was in violation of obscure USGA Golf Rule 33.7, which relates to golfers who intentionally disturb or distract opponents by excessive talking.

He told me to go jump in a lake.

I said that might be a lucrative proposition. “Did you know that golf ball lake recovery divers can earn as much as a $100,000 a year? That’s a lot of money, sure, but it’s very treacherous work. I can tell you story after story of lake divers who’ve been attacked by alligators, snakes and rabid beavers.”

I never knew when to shut off.

And putting the calendar together was all-consuming. The new template would arrive each June and I’d stare with angst at all the blank pages.

I’d usually spread it out over three or four months, but the thought of it was always with me.  My record was 2008 when I did the whole calendar in three weeks.

But my mind was mush for months. I remember sitting in church listening to the pastor discuss The Ten Commandments and I began thinking how The Lord’s Commandments differed from the ones Willie Nelson posts at his Pedernales Golf Club near Austin.

The pastor said God said we must honor our father and mother; The No. 1 rule at Willies is to never talk, whistle hum, clink coins or pass gas when another golfer is shooting.

God said we shouldn’t commit adultery, and I thought about how Willie said bikinis, mini-skirts and skimpy see-throughs on the golf course were forbidden — “Except on women.”

The best part of doing the calendar was realizing how much people around the country enjoyed them. I’d hear from friends who’d see them in holiday calendar kiosks and say they’d bought three.

And every September I’d get a box of about 30 or so to distribute to friends and golf courses around the country every Christmas.

I’d send two to Bob Ford at Oakmont. He’s a regular feature of the calendar, primarily because he’s the only golf pro in the world beloved enough to be the head pro at two of the top 10 golf courses in America, Oakmont and Seminole in Florida.

He told me the Seminole one enjoys a prominent place in the men’s room. I told him I hope they keep the room well stocked with toilet paper.

I’d give eight or so to my friends at Arnold Palmer’s office — The King got two — and the guys at Latrobe Country Club so enjoy them they always treat me like a member whenever I’m lucky enough to play there.

And I’d send them to premier clubs around the area who were often happy to reciprocate with freebie rounds of golf for me and my buddies.

This will be the last year for those happy Christmas deliveries.

After 15 years, I’m finally turning the page — and this time there won’t be another blank one waiting for me to fill in an item about the night when Bill Murray was arrested for drunk driving his golf cart back to the hotel while at a tournament in Sweden.

Time for the 2010 golf calendars