Popping off on champagne celebrations 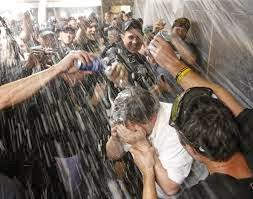 (717 words)
My goal with this post is to write something so magnificent I’ll feel compelled to run down to the liquor store, buy a bottle of champagne and pour it on my head.

Of course, if I do, I’ll likely feel equal parts foolish, wasteful and sticky.

The Pittsburgh Pirates clinched a playoff spot Monday and celebrated by pouring several thousand dollars worth of champagne on themselves, each other and the floors of the visiting locker room at Chicago’s Wrigley Field.

It’s a baseball tradition, albeit one that is becoming controversial. People say flying booze sends the wrong message.

After winning the 2010 ALCS, the Texas Rangers opted to use cases of non-alcoholic ginger ale rather than any intoxicants. This was done in deference to slugger Josh Hamilton, a recovering alcoholic who’d had several high-profile relapses.

It was a gracious gesture.

What effect it had on Hamilton and the team is unknown. The Rangers lost the best-of-seven World Series to the San Francisco Giants four games to one, breaking the hearts of Rangers fans and, I guess, at least one area ginger ale retailer.

I was touched by a contrary gesture Monday on the part of Pirate manager Clint Hurdle, who was interviewed soaked in champagne and joyfully hugging his players.

What he did not want was for even a drop of it to pass his lips.

Hurdle is another recovering alcoholic.

His reaction further endears me to this big, happy man. He wouldn’t let his personal struggles interfere with what has somehow become an oddly customary celebration.

I hope the Pirates go on a great long post-season run that culminates in their first World Series victory since 1979.

If that happens, yeah, I’ll probably tie one on with Val and my friends here in the bar.

What I won’t do is pour any beer over anyone’s head when the final out is registered.

I won’t do this because I’d look stupid my beer-soaked buddies would probably punch me in the nose.

This Pirate season has been such a joy. I feel like a limb I’d lost has grown back and is once again fully functional.

So I was happy to see this appealing group of Pirates celebrating. But I admit to feeling conflicted when they started pouring champagne everyplace but inside something suitable for drinking.

My first thought was, well, ticket prices are going up next season. Someone’s going to pay for all that champagne and it won’t be cheapskate owner, Bob Nutting.

Yogi Berra is a veteran of 10 New York Yankee championship teams, some of them the best in baseball history. He said locker room celebrations from those glory years were nothing like today’s contrived revelry.

There were no plastic tarps taped up in advance; the players weren’t handed peeper-protecting goggles.

“It wasn’t as wild as today,” Berra said. “We had a couple of beers. I know our owner wouldn’t have wanted us to waste so much champagne. He was pretty cheap.”

So I guess I can look forward to feeling a little chagrined if the Pirates advance. Baseball’s champagne trains have all left the stations.

I wish I had an alternative celebration to suggest, but I’m sure stadium rules prohibit smoking cigars lit with $100 bills, and it would probably send the wrong message if the cameras were rolling when all the team hookers were escorted into the locker rooms for a more traditional baseball celebration.

Athletes must feel they need to put on a show. The networks may have a role in orchestrating it, too, because it makes good TV. If that means dumping pricey champagne on one another, so be it.

I guess we live in an age where conspicuous want and excess high-five one another while the rest of us seek some elusive balance.

And I guess I’ll drink to that.

Doesn’t seem to be much choice.